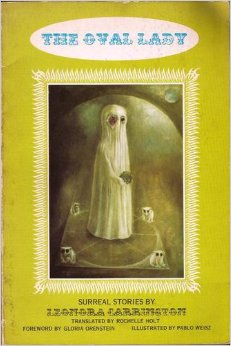 “Leonora Carrington, British-born–Mexican Surrealist writer and artist, is the only woman whose work was included in André Breton’s Anthology of Black Humor, first published in 1939. Carrington was then twenty-two years old. The story which he chose, ‘The Debutante’, was written during 1937-38, her first two years in France, where she lived in Paris and then in St-Martin-D’Ardéche with the Surrealist artist Max Ernst. ‘The Debutante’ was one of five stories published in 1939 in her collection, The Oval Lady, along with collages by Ernst. The previous year, another story, ‘The House of Fear’, had been published as a pamphlet with Ernst’s introduction and three illustrations.” (Source).

The present volume contains six of her stories.