Darko Suvin: To Brecht and Beyond: Soundings in Modern Dramaturgy (1984) 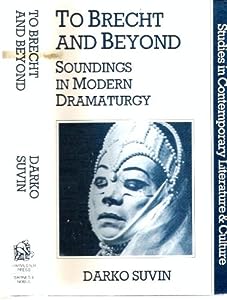 In this collection of nine essays written between 1967 and 1977, Darko Suvin discerns the shape of a post-Individualist drama which may be to our age what the theatre of Shakespeare and Ibsen was to theirs. Suvin establishes the principles of composition of a crucial group of modern plays.

He examines some major attempts and failures to replace Ibsen’s “Individualist” theatre with the “Collectivist” drama. Two particularly important and original contributions to the subject are Suvin’s chapters on the Happenings in the United States and on the Paris Commune Theatre Law. The book focuses on the work of Brecht, both because of the importance of his plays and because of what Professor Suvin sees as Brecht’s central position today in any cultural critique that refuses to despair.