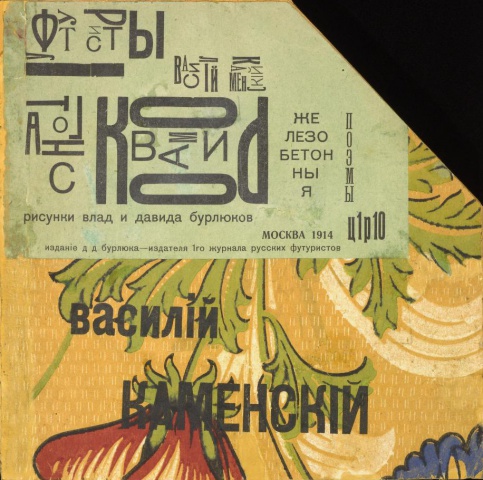 Tango With Cows is an artists’ book by the Russian futurist poet Vasily Kamensky, with three drawings by the brothers David and Vladimir Burliuk. Printed in an edition of 300, the work has become famous primarily for being made entirely of commercially produced wallpaper, with a series of concrete poems – visual poems that employ unusual typographic layouts for expressive effect – printed onto the recto of each page.

Beginning with a drawing by Vladimir Burliuk of a woman, the poems are split into two sections; the first contains 8 concrete poems that use multiple fonts and unusual spacings to express sounds and textures. Telephone, for instance, starts with ‘Telephone No. 2B_128 / rgrgrrrrrr______rrg’. The second group of 6 are arranged within diagonal grids, that evoke both the cubist paintings of Picasso and Braque, and the moulds that are used to make reinforced concrete. These poems refer directly to aerial views, maps and floor-plans. (from Wikipedia)

PDF
PDF (single-page PDF of a volume bound in a slightly different order)
Eduardo Kac’s translation of the poem “Telephone”
TangoWithCows.com, a project to translate the book into English (forthcoming mid-2014)