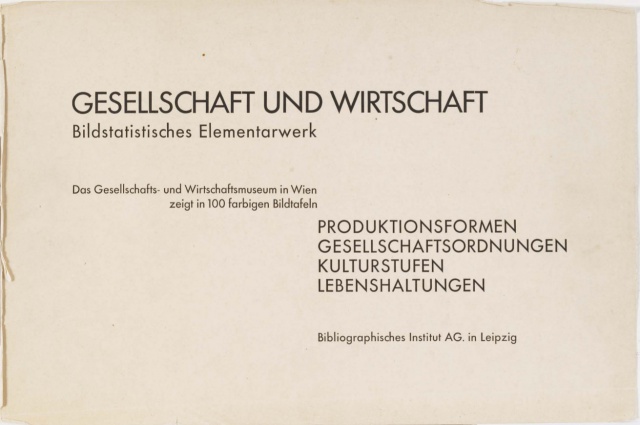 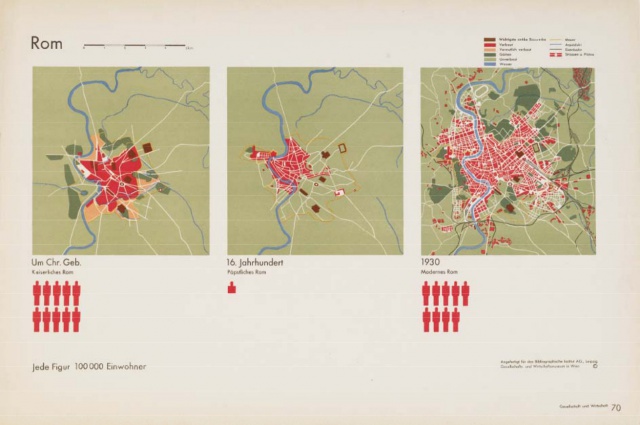 Economy and Society: Elementary Pictorial Statistics is an early example of socially-engaged piece of graphic design. The work was commissioned by the Bibliographical Institute in Leipzig, an important publisher of reference works and dictionaries, to the political economist and Vienna Circle philosopher Otto Neurath and his initiative, the Museum of Society and Economy.

The city-funded Museum was conceived as an institution for informing the public about the results of sociological and economical research. It staffed Marie Reidemeister, the University of Göttingen educated mathematician, Josef Jodlbauer and others. Since 1928 they also worked with graphic artist and council communist Gerd Arntz. The team developed their own method of visual education, picture statistics, hoping to ensure that even “passers-by [..] can acquaint themselves with the latest sociological and economical facts at a glance,” and later to become known as Isotype.

Economy and Society was made as a collection of one hundred statistical charts printed on loose leaves, depicting the state of world affairs of their day, with thirty text tables of source statistics included in an appendix.

“Isotype was conceived as a picture language for teaching purposes and as a lingua franca, not a universal code. Its signs were constructed as clearly as possible in themselves, so they could be used without the help of words. The signs were arranged into ‘fact pictures’ according to certain rules, which were set up by a ‘chief organization’ – as Neurath called his workrooms at The Hague. Thus a picture language emerged from the consistent use of expert graphic design. Its elements or pictograms were reduced to the smallest possible detail of what they represented, for example starting with the outline of a ‘man’, and if necessary, adding attributes to identify the man as a ‘worker’, a ‘coal miner’ or an ‘unemployed person’, and so on. Perspective was abandoned in the pictures, illustrating details were banned and any use of colors would be standardized. Starting with Gesellschaft und Wirtschaft, the picture books produced show the struggle to build up a visual system of rules and signs. As its goal, Neurath identified the ‘education of public opinion’ and, on the utopian level, access to knowledge for all: ‘The Isotype picture language would be of use as a helping language in an international encyclopaedia of common knowledge’.” (this paragraph is taken from Frank Hartmann, Humanization of Knowledge Through the Eye, 2005)