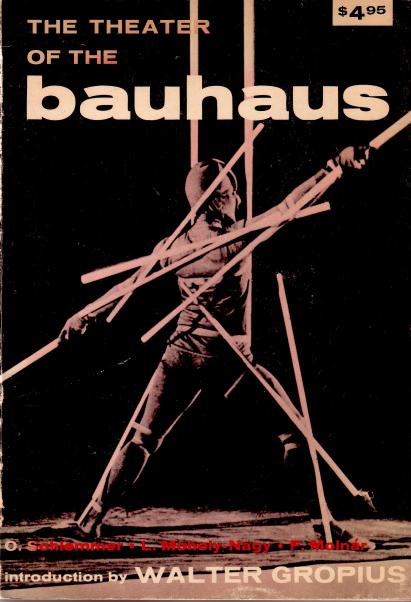 “The Bauhaus movement was one of this century’s most daring experiments in arts education, and its influence on architecture, design, and the visual arts is well known. Many of its most important ideas are revealed in Bauhaus writings about theatrical performance and performance spaces. Originally published in Germany in 1925 — at the height of the Bauhaus movement’s influence– The Theater of the Bauhaus collects writings from some of the movement’s most important figures and describes a theater stripped of history, moralism, scenery, and, for that matter, narrative itself. The Bauhaus group believed traditional theater to be little more than a vehicle for propaganda, with its “peep show stage” separating spectators from performers. They rejected as well the theater of ridicule and satire practiced by the Dadaists and Expressionists. In place of both traditional drama and the avant-garde that lampooned it, Oskar Schlemmer and his Bauhaus associates created an abstract theater of movement, color, light, form, and sound-language would be added later, once the stage had been purged of its “literary encumbrance.” They believed that humanity’s essential nature–freed from history, tradition, class, and nationality–would find expression in theatrical works that incorporated pantomime, masks, dance, and acrobatics.”