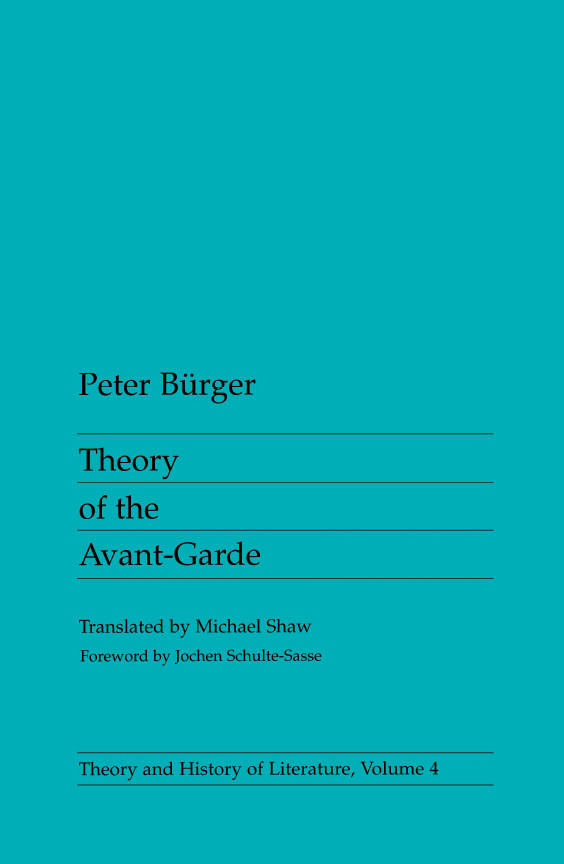 “In this volume, Peter Bürger formulates a theory of the ‘institution of art’. He argues that the social status of literature and art cannot be explained by making simple, direct links between the contents of individual works and social history. Rather, he holds, it is the social status of art, its function and prestige in society, that provides the connection between the individual art work and history. Bürger’s concept of the institution of art establishes a framework within which a work of art is both produced and received.

The French and German literary and visual avant-garde of the 1920s provides the test of Bürger’s theory. Focusing on the role of the artistic manifesto and, particularly, on the collage as an art form, he shows how avant-garde movements questioned the autonomous, self-referential status of art in bourgeois society and thus represented a radical break with the aestheticism of high modernism. Bürger attacks metaphysical aesthetics and argues instead for a materialistic aesthetic theory for today, one that is rooted in the reality of the social sphere. His theory calls into question any conventional concept of art derived from Romantic notions of organic unity.

Theory of the Avant-Garde provoked such discussion in Germany that its publisher, Suhrkamp Verlag, issued a book of responses that was more than twice the size of Bürger’s own book.” (from the back cover)

See also Bürger’s essay Avant-Garde and Neo-Avant-Garde: An Attempt to Answer Certain Critics of Theory of the Avant-Garde, 2010.