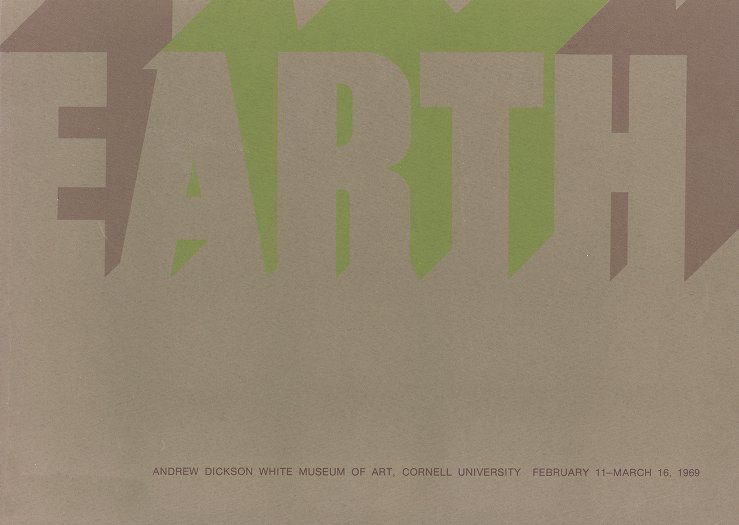 “With the emergence of land art in the late 1960s, artists began making works inextricably bound to their sites, which became known as “Earthworks.” They worked on location and used the earth itself as canvas or sculptural material, making outdoor gestures—often in distant corners of the world—that were both antimonumental and epic. Because their art evaded the traditional path from cloistered studio to rarefied gallery or museum, the artists often were dependent on photography and the mass media to communicate its very existence.

The Earth Art exhibition—held at the Andrew Dickson White Museum of Art at New York’s Cornell University, in 1969—was the first museum exhibition dedicated to this new way of producing and presenting artworks. Conceived by Willoughby Sharp (1936–2008), an independent curator, publisher, and artist, the exhibition presented site-specific installations by nine artists: Jan Dibbets from the Netherlands, Hans Haacke and Günther Uecker from Germany, Richard Long from Great Britain, David Medalla from the Philippines, and Neil Jenny, Robert Morris, Dennis Oppenheim, and Robert Smithson from the United States. Initially twelve artists were invited: Michael Heizer and Walter de Maria briefly exhibited in the show but were not mentioned in the catalogue, which was published a year later. Carl Andre was also invited but ultimately declined to participate.

Most of the participating artists were on site for about a week in late January/early February of 1969 to make new pieces for the exhibition with the help of students from Cornell University, including Gordon Matta-Clark and Louise Lawler, graduates of the College of Architecture, Art, and Planning. Medalla sent installation instructions for his piece by mail, while Morris had to phone his in—he could not make it to Ithaca because of a blizzard.

Installed inside the A. D. White Museum and scattered around the Cornell campus and the surrounding Ithaca area, the commissioned pieces sought to eschew the commodity status of the art object and to question the role of institutions. The dissolution of boundaries—between object and context, between different mediums, and between the work of art and its documentation—was a hallmark of the art of the time, reflecting 1960s counterculture more broadly. It is at this intersection—where art meets life and art turns into activism—that the influence of the 1960s earth artists has perhaps had the most significant impact on a current generation of artists working on issues related to ecology.

The exhibition catalogue includes a foreword by Thomas W. Leavitt (1930–2010), then the director of the A. D. White Museum of Art; essays by Sharp and William C. Lipke, then professor of art history at Cornell University; artist biographies; transcripted excerpts from a symposium on earth art held at Cornell on February 6, 1969; and more than forty black-and-white photographs.” (Source)

Images
Video interviews with Willoughby Sharp and Dennis Oppenheim about the exhibition, 2008, 20 min