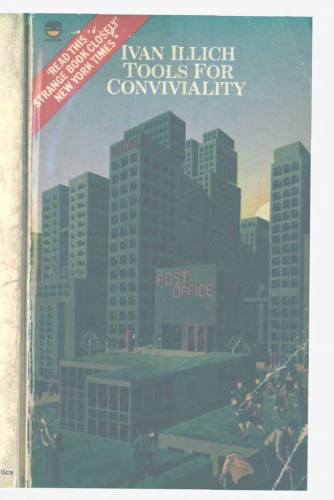 “Ivan Illich has aroused worldwide attention as a formidable critic of some of society’s most cherished institutions – organized religion, the medical profession, compulsory education for all.

In Tools for Conviviality he carries further his profound questioning of modern industrial society by showing how mass-production technologies are turning people into the accessories of bureaucracies and machines.

Tools for Conviviality was published only two years after Deschooling Society. In this new work Illich generalized the themes that he had previously applied to the field of education: the institutionalization of specialized knowledge, the dominant role of technocratic elites in industrial society, and the need to develop new instruments for the reconquest of practical knowledge by the average citizen. Illich proposed that we should ‘invert the present deep structure of tools’ in order to ‘give people tools that guarantee their right to work with independent efficiency.'”