Friedrich Georg Jünger: The Failure of Technology: Perfection Without Purpose (1946–) 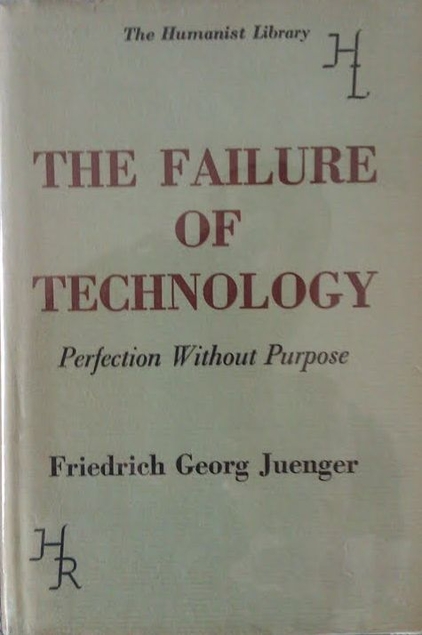 Written in the spring and early summer of 1939 and “first published in German as Die Perfektion der Technik in 1946, F.G. Jünger argues that technology has become second nature and will bring “the downfall of the state”. F.G. Jünger, a literary writer and essayist, was the brother of Ernst Jünger. Both represented the intellectual right-wing of the ‘conservative revolution’ in the Weimar Republic and had ambivalent relations to the Third Reich.

The Failure of Technology was a major source for Heidegger’s 1950s turn towards a philosophy of technology in which technology, as second nature, determines human existence.” (FC) Barbarism represents a critique, from the perspective of Michel Henry’s unique philosophy of life, of the increasing potential of science and technology to destroy the roots of culture and the value of the individual human being. For Henry, barbarism is the result of a devaluation of human life and culture that can be traced back to the spread of quantification, the scientific method and technology over all aspects of modern life. The book develops a compelling critique of capitalism, technology and education and provides a powerful insight into the political implications of Henry’s work. It also opens up a new dialogue with other influential cultural critics, such as Marx, Husserl, and Heidegger.

First published in French in 1987, Barbarism aroused great interest as well as virulent criticism. Today the book reveals what for Henry is a cruel reality: the tragic feeling of powerlessness experienced by the cultured person. Above all he argues for the importance of returning to philosophy in order to analyse the root causes of barbarism in our world.