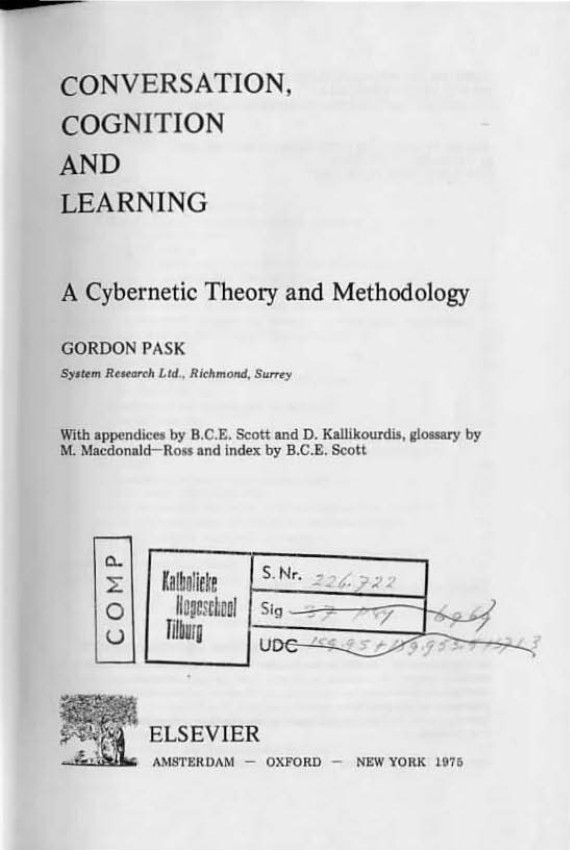 “The work on which the content of this book is centred took place over more than a decade. It started, in the middle fifties, with the construction of adaptive training machines, with superficially disconnected studies of chemical computing systems, and, towards 1960, with experiments on machine-monitored small group inter-action. Since that period an underlying theory has emerged from a gaggle of prescient concepts. It owes a great deal of its present shape to the ideation and criticism of friends and colleagues, only some of whom can be mentioned directly.

First of all, it is noteworthy that parallel work has gone on in two places; my own laboratory at System Research Ltd and in Heinz Von Foerster’s Biological Computer laboratory, at the University of Illinois. Both endeavours were encouraged by Warren McCulloch; the reader will detect the influence of his ideas and guidance appearing repeatedly throughout the discussion. Apart from this, the parallel development was not specially contrived and it was sustained by irregular personal liason. Hence, it is gratifying to find that recent publications from the Biological Computer Laboratory image our own conclusions, differing, chiefly, in the notation employed and the area of application. People familiar with the field will probably find the threads of mutualism quite obvious; for the benefit of others, a few of these threads are picked out. For example, Loefgren worked with Von Foerster whilst refining the formalism on which the currently-used type of abstract reproductive and evolutionary process is founded; Maturana (whose theory of autopoietic systems is the analogue, in a biologist’s mind, for certain stable cognitive organisations in the present theory) worked there as well; Maturana’s theory is to appear in a subsequent monograph in this series. Both Ashby, the system theorist, and Gunther, the philosopher, taught and researched with Von Foerster; much of the present theory hinges upon their ideas.

On home ground, the theory, and the experiments as well, owe a great deal to two colleagues of long standing: Brian Lewis and Bernard Scott. Prof. Lewis and I shared a common interest in cognition since early in the 1960s and brooded jointly (as we still do) over problems of learning and teaching. Bernard Scott came to the laboratory at the time when Lewis went off to study education in the large and since that time we have maintained a comparably symbiotic intellectual relationship. At about the time I started to write this manuscript (having discarded many previous drafts of it as inadequate) both circumstance and research interest brought all of us into close contact again and we were joined, in the last year, by Dionysious Kallikourdis (who contributes one Appendix, explicitly).” (Gordon Pask, from Preface)