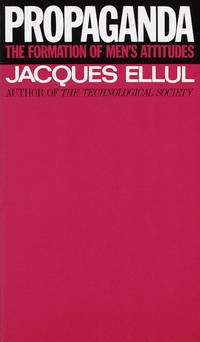 “A far more frightening work than any of the nightmare novels of George Orwell. With the logic which is the great instrument of French thought, [Ellul] explores and attempts to prove the thesis that propaganda, whether its ends are demonstrably good or bad, is not only destructive to democracy, it is perhaps the most serious threat to humanity operating in the modern world.” –Los Angeles Times