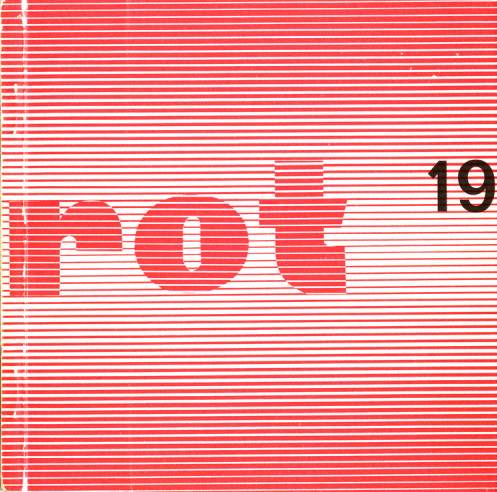 “This little booklet of 14 pages is one of the first publications ever on computer art. It appeared at the occasion of the first exhibition of computer-generated, algorithmic art world-wide: the famous show of a small set of graphic works by Georg Nees. The show was held from February 5 to 19, 1965, on the premises of the Studiengalerie of TH Stuttgart (now University of Stuttgart).

The booklet is in German. It contains two short contributions by Georg Nees (2 pages) and Max Bense (3 pages) plus six images of Nees’ earliest works.

Both texts are important from a historic perspective. Nees gives a brief account of the essentials of early algorithmic art, including five descriptions of programs in plain language. These descriptions are precise formulations of the algorithms, and as such they constitute perfect documentations, independent of programming language, operating system, run-time support, or hardware. This was possible because of the simplicity of the algorithmic schema.

Bense’s text, Projekte generativer Ästhetik, must be considered the manifesto of computer art. It introduces the notion of Generative Aesthetics, in direct reference to Chomsky’s Generative Grammar. It is formulated in Bense’s typical apodictic, rigorous, almost mechanistic prose. But it points to a development that started to blossom and gained recognition only during the first decade of the 21st century: the exciting movement of generative art, design, architecture, music, and more.

The special issue of Studio International, published by Jasia Reichardt, for the Cybernetic Serendipity exhibition in London, 1968, contains an English translation. It has often been re-published.” (source)