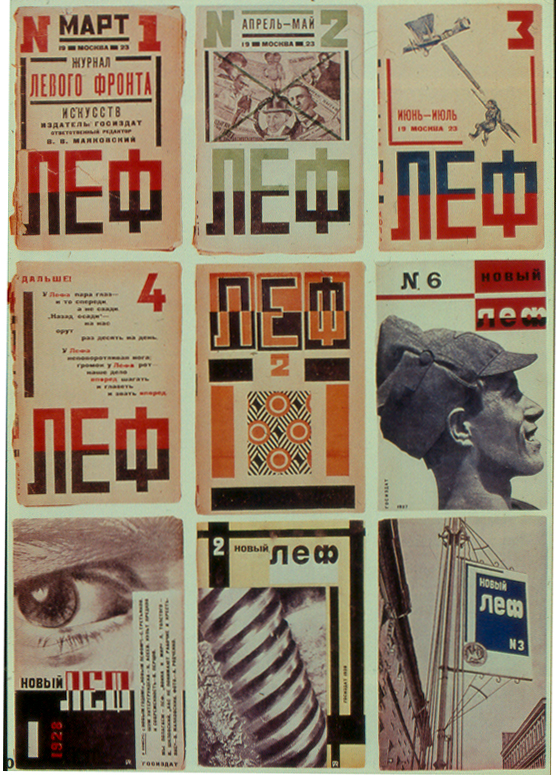 LEF (“ЛЕФ”) was the journal of the Left Front of the Arts (“Левый фронт искусств” – “Levy Front Iskusstv”), a widely ranging association of avant-garde writers, photographers, critics and designers in the Soviet Union. It had two runs, one from 1923 to 1925 as LEF, and later from 1927 to 1929 as Novyi LEF (‘New LEF’). The journal’s objective, as set out in one of its first issues, was to “re-examine the ideology and practices of so-called leftist art, and to abandon individualism to increase art’s value for developing communism.”

Although LEF was catholic in its choices of writers, it broadly reflected the concerns of the Productivist left-wing of Constructivism. The editors were Osip Brik and Vladimir Mayakovsky: fittingly, one a Russian Formalist critic and one a poet and designer who helped compose the 1912 manifesto of Russian Futurists entitled, “A Slap in the Face of Public Taste”. The covers were designed by Alexander Rodchenko, and featured photomontages early on, being followed by photographs in New LEF. Among the writings published in LEF for the first time were Mayakovsky’s long poem About This, and Sergei Eisenstein’s The Montage of Attractions, as well as more political and journalistic works like Isaac Babel’s Red Cavalry. The journal had funding from the state, and was discussed critically, but not unsympathetically by Leon Trotsky in Literature and Revolution (1924).

The later New LEF (“Новый ЛЕФ” – “Novyi Lef”), which was edited by Mayakovsky along with the playwright, screenplay writer and photographer Sergei Tretyakov, tried to popularise the idea of ‘Factography’: the idea that new technologies such as photography and film should be utilised by the working class for the production of ‘factographic’ works. In this it had a great deal of influence on theorists in the West, especially Walter Benjamin and Bertolt Brecht. Linked journals also appeared such as the Constructivist architectural journal SA (edited by Moisei Ginzburg and Alexander Vesnin) and Proletarskoe Foto, on photography. The New LEF closed in 1929 over a dispute over its direction between Mayakovsky and Tretyakov, and under pressure for its ‘Formalism’, which jarred with the incipient Socialist Realism. (from Wikipedia)