Denise Schmandt-Besserat: When Writing Met Art: From Symbol to Story (2007) 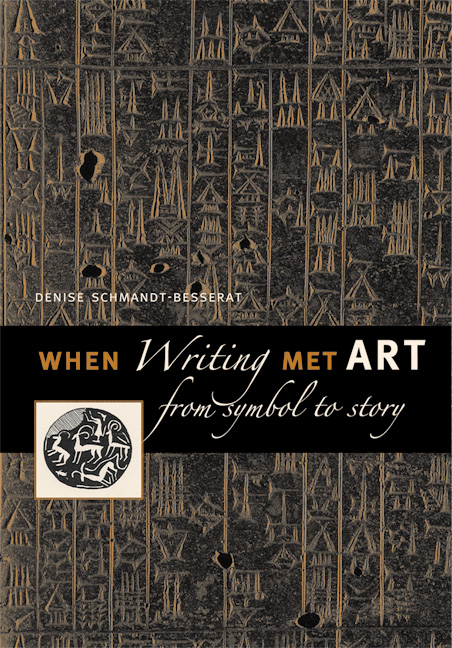 “Denise Schmandt-Besserat opened a major new chapter in the history of literacy when she demonstrated that the cuneiform script invented in the ancient Near East in the late fourth millennium BC—the world’s oldest known system of writing—derived from an archaic counting device. Her discovery, which she published in Before Writing: From Counting to Cuneiform and How Writing Came About, was widely reported in professional journals and the popular press. In 1999, American Scientist chose How Writing Came About as one of the “100 or so Books that shaped a Century of Science.”

In When Writing Met Art, Schmandt-Besserat expands her history of writing into the visual realm of communication. Using examples of ancient Near Eastern writing and masterpieces of art, she shows that between 3500 and 3000 BC the conventions of writing—everything from its linear organization to its semantic use of the form, size, order, and placement of signs—spread to the making of art, resulting in artworks that presented complex visual narratives in place of the repetitive motifs found on preliterate art objects. Schmandt-Besserat then demonstrates art’s reciprocal impact on the development of writing. She shows how, beginning in 2700-2600 BC, the inclusion of inscriptions on funerary and votive art objects emancipated writing from its original accounting function. To fulfill its new role, writing evolved to replicate speech; this in turn made it possible to compile, organize, and synthesize unlimited amounts of information; and to preserve and disseminate information across time and space.

Schmandt-Besserat’s pioneering investigation of the interface between writing and art documents a key turning point in human history, when two of our most fundamental information media reciprocally multiplied their capacities to communicate. When writing met art, literate civilization was born.”

One Response to “Denise Schmandt-Besserat: When Writing Met Art: From Symbol to Story (2007)”