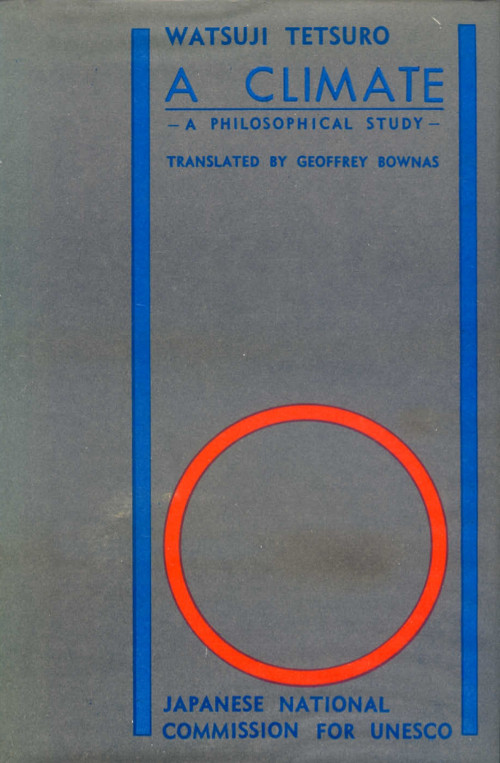 “In 1927 the Japanese philosopher and cultural and intellectual historian Tetsurō Watsuji went to Germany and returned the next year much influenced by the philosophy of Martin Heidegger. Watsuji could not agree with Heidegger’s theories about human existence, so he wrote a book named Fūdo, published in English as A Climate: A Philosophical Study (reprinted as Climate and Culture: A Philosophical Study). Watsuji explained Fūdo as ‘the natural environment of a given land’. Watsuji thought that Heidegger placed too much influence on the individual and overlooked the importance of social and geographical factors that affect the individual.

Heidegger’s emphasis on the individual was an outcome of centuries of European thought. Descartes said, ‘cogito, ergo sum’, (I think, therefore I am). Watsuji, however, saw the human being as a product of a ‘climate’ including not only natural surroundings but also the social environment of family, society and history. For example, Watsuji explains that ‘cold’ is not a specific temperature, but also the sensation of ‘cold’ which we actually experience in our daily lives. In other words, is the feeling of ‘cold’ a subjective, conscious feeling? Or does the feeling of ‘cold’ come from the independent existence of ‘cold’? Watsuji says that neither is a satisfactory answer because both explanations make a distinction between subject and object, or human and nature. A human being recognizes coldness before any division is made between ‘subjective’ and ‘objective’. For Watsuji, the relationship between a human and his environment, called aidagara, already exists before any other concepts are understood. This idea is similar to the “pure experience” of Nishida Kitaro.

Watsuji’s philosophical uniqueness is the explanation of human existence, aidagara, in terms of social and geographical phenomena. French scholar Augustin Berque was influenced by Watsuji’s way of thought and understood that Watsuji does not regard nature and nature-human as dual existences. Berque suggests the term trajet to include the subject simultaneously with object, nature with artificiality. In French the term trajet usually means distance of travel, or route. Berque sought to change the fixed meaning of subject and object, nature and culture, individual and society, to include the possibility of inter-changeable relationships.” (from New World Encyclopedia)

The book was reprinted under the title Climate and Culture: A Philosophical Study by Greenwood Press, 1961.

Watsuji at Stanford Encyclopedia of Philosophy