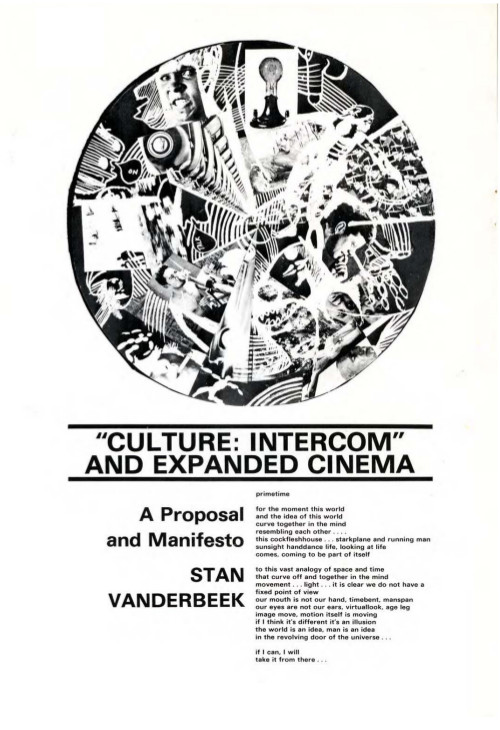 “It is imperative that we (the world’s artists) invent a new world language … that we invent a non-verbal international picture-language … I propose the following:

That immediate research begin on the possibility of an international picture-language using fundamentally motion pictures.

That we research immediately existing audio-visual devices, to combine these devices into an educational tool, that I shall call an ‘experience machine’ or a ‘culture-intercom’ …

The establishment of audio-visual research centers … preferably on an international scale … These centers to explore the existing audio-visual hardware.

The development of new image-making devices … (the storage and transfer of image materials, motion pictures, television, computers, video-tape, etc. …) In short, a complete examination of all audio-visual devices and procedures, with the idea in mind to find the best combination of such machines for non-verbal inter-change.

The training of artists on an international basis in the use of these image tools.

The immediate development of prototype theatres, hereafter called ‘Movie-Dromes’ that incorporate the use of such projection hardware. The immediate research and development of image-events and performances in the ‘Movie-Drome’. … I shall call these prototype presentations: ‘Movie-Murals’, ‘Ethos-Cinema’, ‘Newsreel of Dreams’, ‘Feedback’, ‘Image libraries’ … [..] When I talk of the movie-dromes as image libraries, it is understood that such ‘life-theatres’ would use some of the coming techniques (video tape and computer inter-play) and thus be real communication and storage centers, that is, by satellite, each dome could receive its images from a world wide library source, store them and program a feedback presentation to the local community that lived near the center, this newsreel feedback, could authentically review the total world image ‘reality’ in an hour long show that gave each member of the audience a sense of the entire world picture …

‘Intra-communitronics’, or dialogues with other centers would be likely, and instant reference material via transmission television and telephone could be called for and received at 186,000 m.p.s. … from anywhere in the world. Thus I call this presentation, a ‘newsreel of ideas, of dreams, a movie-mural’. An image library, a culture de-compression chamber, a culture inter-com.” (from the manifesto)

PDF (all three versions in a single PDF)