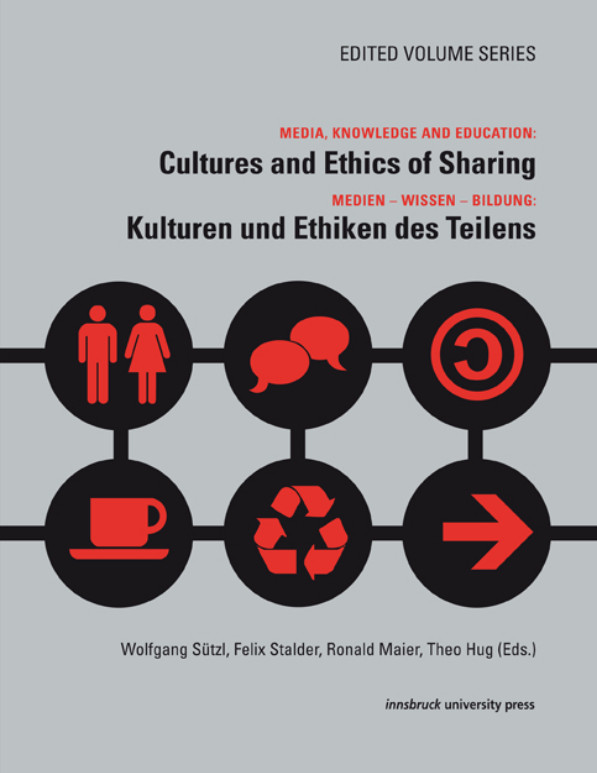 “This is a volume of essays about sharing. Few people could have predicted that practices of sharing would gain such prominence in contemporary society. It is, arguably, one of the most unexpected developments of the early 21st century. Surprising, but not inexplicable. Over the last decade, numerous developments have taken place that created conditions under which new practices could flourish and the roles of sociability and sharing are being re-examined.” (from the Introduction)

The individual texts in this volume where first presented at the conference “Cultures and Ethics of Sharing” which took place at the University of Innsbruck, Austria, in November 2011. MP3: The Meaning of a Format recounts the hundred-year history of the world’s most common format for recorded audio. Understanding the historical meaning of the MP3 format entails rethinking the place of digital technologies in the larger universe of twentieth-century communication history, from hearing research conducted by the telephone industry in the 1910s, through the mid-century development of perceptual coding (the technology underlying the MP3), to the format’s promiscuous social life since the mid 1990s.

MP3s are products of compression, a process that removes sounds unlikely to be heard from recordings. Although media history is often characterized as a progression toward greater definition, fidelity, and truthfulness, MP3: The Meaning of a Format illuminates the crucial role of compression in the development of modern media and sound culture. Taking the history of compression as his point of departure, Jonathan Sterne investigates the relationships among sound, silence, sense, and noise; the commodity status of recorded sound and the economic role of piracy; and the importance of standards in the governance of our emerging media culture. He demonstrates that formats, standards, and infrastructures—and the need for content to fit inside them—are every bit as central to communication as the boxes we call “media.”

“A USB drive is a flash memory data storage device that is integrated with a Universal Serial Bus interface. With the invention of USB drives, digital information has become extremely portable and easy to transfer in large quantities from one computer to another. Students regularly bring their films and MP3 files to class on USB drives. Professors carry their lectures and presentations on USB drives and plug them into a school’s host computer. Files move back and forth whether there is internet access or not. And as we have seen in the recent revolutions in Egypt, and the Middle East, internet access is not guaranteed. Websites can be blocked or an oppressive government can get the whole thing turned off and taken away. Corporations can pressure governments to throttle the internet in unequal biased manners that are good for their businesses, but not individuals and communities. Still, files want to move between people. Back up plans are needed and sharing must continue. We are all creating massive digital surpluses and broadband is too limited for us to have greater, freer kinds of exchanges.

For Designated Drivers, we invited an international selection of twenty people and groups to each fill one four-gigabyte USB flash drive with material of their choosing. These drives will then be presented in exhibition spaces, attached to wall-mounted retractable laundry lines. Visitors will be able to load their own drives or laptops (or use a host computer and CDrs or DVDrs) with any of the material they would like from each of the flash drives.

The drives include images, films, audio, programs, and many publications worth of writing and graphic design. File types include: MP3, JPEG, PNG, AIFF, TIFF, PSD, WORD DOCs, PPT, MPEG, PDF, AVI,and more. The participants have included mountains of material – often at higher resolution than is commonly seen on a personal website, and in many cases material that is not duplicated online at all. Some participants have used this opportunity to present a few recent projects with great depth, while others have chosen to survey their entire creative output over more than a decade.

The contents of the flash drives in Designated Drivers are deliberately not available online from one centralized location. We want you to get out of your house. We want you to mingle, in person, with others and talk about which files look interesting to transfer and which might be more to someone else’s liking. We want to make file sharing a bit more physical, social and special again – the way that tape traders in the 1980s would duplicate music onto cassette for another another and mail amazing obscurities to each other all over the world. We also recall those who linked their VCRs together to share obscure films and concert footage. Technology has come a long way, and today we can make these exchanges without a quality loss with each generation that gets removed from the original. We can fit more copies into ever smaller packages. But we question our own growing dependence on the internet as a means of detached information exchange and want to try another approach.

This booklet is a guide to the first round of offerings. Each ‘Designated Driver’ has written an introduction to their device. We welcome you to copy whatever you like, and to further share it however you see fit. We encourage you to organize your own social file sharing situations to make this process more fun, more social, and a hell of a lot less controllable.” (organizers)