How has wirelessness—being connected to objects and infrastructures without knowing exactly how or where—become a key form of contemporary experience? Stretching across routers, smart phones, netbooks, cities, towers, Guangzhou workshops, service agreements, toys, and states, wireless technologies have brought with them sensations of change, proximity, movement, and divergence. In Wirelessness, Adrian Mackenzie draws on philosophical techniques from a century ago to make sense of this most contemporary postnetwork condition. The radical empiricism associated with the pragmatist philosopher William James, Mackenzie argues, offers fresh ways for matching the disordered flow of wireless networks, meshes, patches, and connections with felt sensations.

For Mackenzie, entanglements with things, gadgets, infrastructures, and services—tendencies, fleeting nuances, and peripheral shades of often barely registered feeling that cannot be easily codified, symbolized, or quantified—mark the experience of wirelessness, and this links directly to James’s expanded conception of experience. “Wirelessness” designates a tendency to make network connections in different times and places using these devices and services. Equally, it embodies a sensibility attuned to the proliferation of devices and services that carry information through radio signals. Above all, it means heightened awareness of ongoing change and movement associated with networks, infrastructures, location, and information.

The experience of wirelessness spans several strands of media-technological change, and Mackenzie moves from wireless cities through signals, devices, networks, maps, and products, to the global belief in the expansion of wireless worlds. 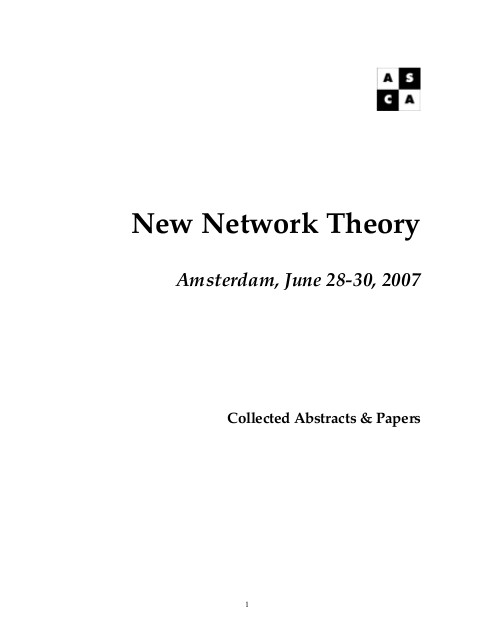 On 28 – 30 June 2007, the Institute of Network Cultures and Media Studies, University of Amsterdam and the Amsterdam School for Cultural Analysis, organized the international conference New Network Theory. The object of study has shifted from the virtual community and the space of flows to the smart mob. When the object of study changes, so may the distinctions that dominate, particularly the schism between place-based space and place-less space, both organized and given life by networks. New Network Theory explored contemporary network theory that suits and reflects the changes to the objects of study that come to define our understandings of network culture – a post-Castellsian network theory, if you will, that takes technical media seriously.