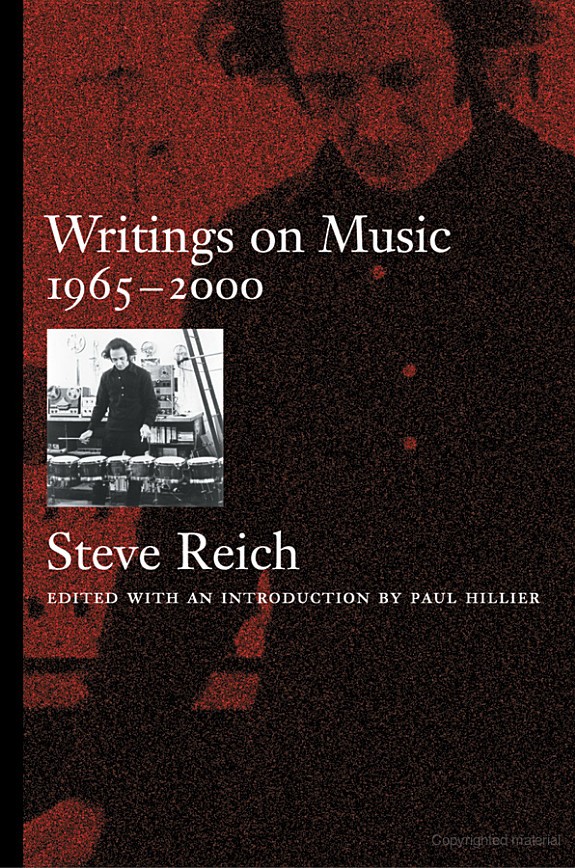 “In the mid-1960s, Steve Reich radically renewed the musical landscape with a back-to-basics sound that came to be called Minimalism. These early works, characterized by a relentless pulse and static harmony, focused single-mindedly on the process of gradual rhythmic change. Throughout his career, Reich has continued to reinvigorate the music world, drawing from a wide array of classical, popular, sacred, and non-western idioms. His works reflect the steady evolution of an original musical mind.

Writings on Music documents the creative journey of this thoughtful, groundbreaking composer. These 64 short pieces include Reich’s 1968 essay “Music as a Gradual Process,” widely considered one of the most influential pieces of music theory in the second half of the 20th century. Subsequent essays, articles, and interviews treat Reich’s early work with tape and phase shifting, showing its development into more recent work with speech melody and instrumental music. Other essays recount his exposure to non-western music — African drumming, Balinese gamelan, Hebrew cantillation — and the influence of these musics as structures and not as sounds. The writings include Reich’s reactions to and appreciations of the works of his contemporaries (John Cage, Luciano Berio, Morton Feldman, Gyorgy Ligeti) and older influences (Kurt Weill, Schoenberg). Each major work of the composer’s career is also explored through notes written for performances and recordings.

Paul Hillier, himself a respected figure in the early music and new music worlds, has revisited these texts, working with the author to clarify their central narrative: the aesthetic and intellectual development of an influential composer. For long-time listeners and young musicians recently introduced to his work, this book provides an opportunity to get to know Reich’s music in greater depth and perspective.” Where did musical minimalism come from—and what does it mean? In this significant revisionist account of minimalist music, Robert Fink connects repetitive music to the postwar evolution of an American mass consumer society. Abandoning the ingrained formalism of minimalist aesthetics, Repeating Ourselves considers the cultural significance of American repetitive music exemplified by composers such as Terry Riley, Steve Reich, and Philip Glass. Fink juxtaposes repetitive minimal music with 1970s disco; assesses it in relation to the selling structure of mass-media advertising campaigns; traces it back to the innovations in hi-fi technology that turned baroque concertos into ambient “easy listening”; and appraises its meditative kinship to the spiritual path of musical mastery offered by Japan’s Suzuki Method of Talent Education.