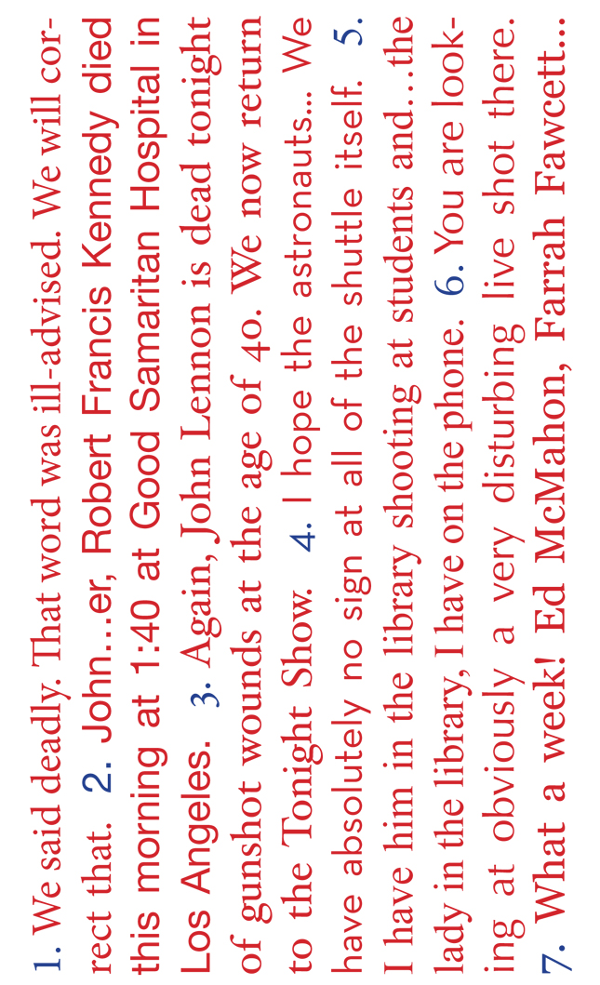 “What are the words we use to describe something that we never thought we’d have to describe? In Seven American Deaths and Disasters, Kenneth Goldsmith transcribes historic radio and television reports of national tragedies as they unfurl, revealing an extraordinarily rich linguistic panorama of passionate description. Taking its title from the series of Andy Warhol paintings by the same name, Goldsmith recasts the mundane as the iconic, creating a series of prose poems that encapsulate seven pivotal moments in recent American history: the John F. Kennedy, Robert F. Kennedy, and John Lennon assassinations, the space shuttle Challenger disaster, the Columbine shootings, 9/11, and the death of Michael Jackson. While we’ve become accustomed to watching endless reruns of these tragic spectacles—often to the point of cliché—once rendered in text, they become unfamiliar, and revealing new dimensions emerge. Impartial reportage is revealed to be laced with subjectivity, bias, mystery, second-guessing, and, in many cases, white-knuckled fear. Part nostalgia, part myth, these words render pivotal moments in American history through the communal lens of media.”