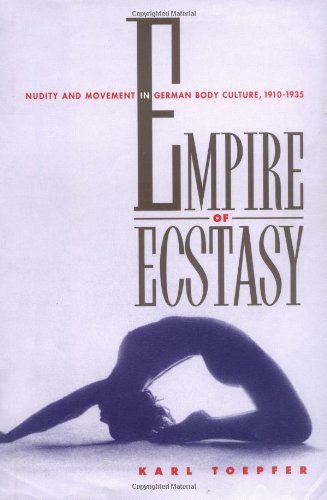 Empire of Ecstasy offers an interpretation of the explosion of German body culture between the two wars—nudism and nude dancing, gymnastics and dance training, dance photography and criticism, and diverse genres of performance from solo dancing to mass movement choirs. Karl Toepfer presents this dynamic subject as a vital and historically unique construction of “modern identity.”

The modern body, radiating freedom and power, appeared to Weimar artists and intelligentsia to be the source of a transgressive energy, as well as the sign and manifestation of powerful, mysterious “inner” conditions. Toepfer shows how this view of the modern body sought to extend the aesthetic experience beyond the boundaries imposed by rationalized life and to transcend these limits in search of ecstasy. With the help of much unpublished or long-forgotten archival material (including many little-known photographs), he investigates the process of constructing an “empire” of appropriative impulses toward ecstasy.

Toepfer presents the work of such well-known figures as Rudolf Laban, Mary Wigman, and Oskar Schlemmer, along with less-known but equally fascinating body culture practitioners. His book is certain to become required reading for historians of dance, body culture, and modernism.

PDF’d HTML, HTML (from the publisher)