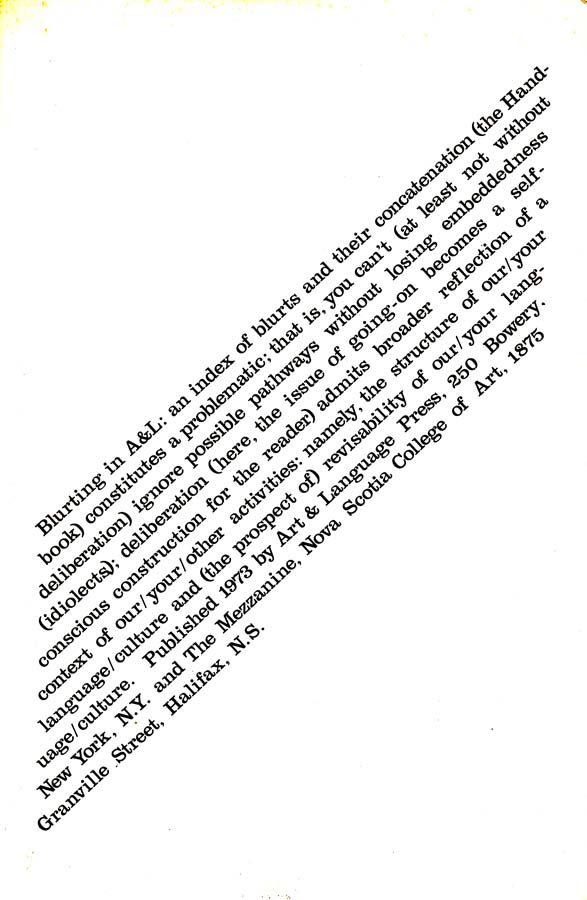 Blurting in A & L is a printed booklet whose content is a dictionary with blurts or ‘annotations’. The annotations were written by the members of Art & Language Ian Burn, Michael Corris, Preston Heller, Joseph Kosuth, Andrew Menard, Mel Ramsden and Terry Smith.

“The project began as a collaboration among Art & Language members in New York City. In weekly meetings from January to July 1973, eight participants produced written statements called ‘annotations’ or ‘blurts’ on topics ranging from the ordinary to the abstruse (art, learning, ambiguity, heuristics, stimulus-meaning). In each subsequent meeting the group would return with new statements that ‘went on’ from the last week’s annotations. In the end, through the efforts of Michael Corris and Mel Ramsden the comments were compiled in a handbook. In all, some 400 odd entries were edited and grouped according to subheadings with vague quasi-logical connectors linking them to one another.

Since the connections among the entries were many-to-many, readers could choose their own course through the material, which blurred the boundary between passive reader and active participant. This was a key ideology of Art & Language – the idea that membership was permeable or, as one participant put it, ‘a function of participation’.” (from a commentary by Chris Gilbert, Mute, 2002)

An online version installed by ZKM, Karlsruhe, in 2002 includes articles which contextualize Blurting in A & L within the activities of the group in the 1970s. Present and former members of Art & Language (Michael Baldwin, Michael Corris, Philip Pilkington, Mel Ramsden) summarize and reflect on their activities. Thomas Dreher embeds Blurting in A & L within the proceedings of the discourse of Art & Language.

Blurting in A&L: An Index of Blurts and Their Concatenation (the Handbook) Constitutes a Problematic; That Is, You Can’t (at Least Not Without Deliberation) Ignore Possible Pathways Without Losing Embeddedness (Ideolects); Deliberation (Here, the Issue of Going-On Becomes a Self-Conscious Construction for the Reader) Admits Broader Reflection of a Context of Our/Your/Other Activities: Namely, the Structure of Our/Your Language/Culture and (the Prospect of) Revisability of Our/Your Language/Culture
Edited by Michael Corris, Mel Ramsden
Publisher Art & Language Press, New York, and The Mezzanine, Nova Scotia College of Art, Halifax, 1973
92 pages

Announcement of the hypertext version (Syndicate, 2002)