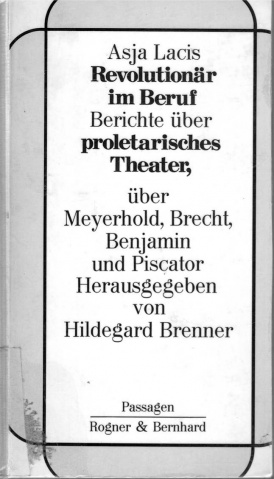 A memoir of the theatre director, actress and pedagogue Asja Lacis follows her life and theatre work in revolutionary Russia and the Weimar Republic, and offers commentary on work and ideas of avant-garde artists and groups of the time. Lacis was a personal friend and collaborator of Walter Benjamin and Bertolt Brecht (whom she introduced to each other), Erwin Piscator and Bernhard Reich, among others. She was a primary influence in moving Benjamin to the Left. Along with Reich she was also responsible for making Brecht known in the Soviet Union.