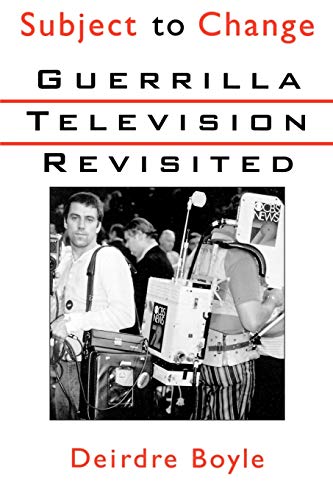 “Part of the larger alternative media tide which swept the country in the late sixties, guerilla television emerged when the arrival of lightweight, affordable consumer video equipment made it possible for ordinary people to make their own television. Fueled both by outrage at the day’s events and by the writings of people like Marshall McLuhan, Tom Wolfe, and Hunter S. Thompson, the movement gained a manifesto in 1971, when Michael Shamberg and the Raindance Corp. published Guerilla Television. As framed in this quixotic text, the goal of the video guerilla was nothing less than a reshaping of the structure of information in America.

In Subject to Change, Deidre Boyle tells the fascinating story of the first TV generation’s dream of remaking television and their frustrated attempts at democratizing the medium. Interweaving the narratives of three very different video collectives from the 1970s–TVTV, Broadside TV, and University Community Video–Boyle offers a thought-provoking account of an earlier electronic utopianism, one with significant implications for today’s debates over free speech, public discourse, and the information explosion.”