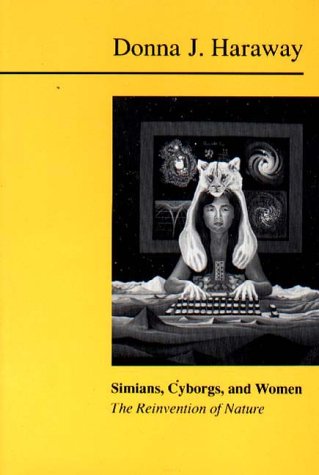 “The idea that nature is constructed, not discovered – that truth is made, not found – is the keynote of recent scholarship in the history of science. Tracing the gendered roots of science in culture, Donna Haraway’s writings about scientific research on monkeys and apes is arguably the finest scholarship in this tradition. She has carefully studied the publications, the papers, the correspondence, and the history of the expeditions and institions of primate studies, uncovering the historical construction of the pedigrees for existing social relations – the naturalization of race, sex, and class. Throughout this book she is analysing accounts, narratives, and stories of the creation of nature, living organisms, and cyborgs (cybernetic organisms: systems which embrace organic and technological components). She also looks critically at the immune system as an information system, and shows how deeply our cultural assumptions penetrate into allegedly value-neutral medical research. In several of these essays she explores and develops the contested terms of reference of existing feminist scholarship; and by mapping the fate of two potent and ambiguous worlds – ‘nature’ and ‘experience’ – she uncovers new visions and provides the possibility of a new politics of hope.

Her previous book, Primate Visions, has been called ‘outstanding’, ‘original’, ‘brilliant’, ‘important’ by leading scholars in the field. Simians, Cyborgs, and Women contains ten essays written between 1978 and 1989. They establish her as one of the most thoughtful and challenging feminist writers today.”