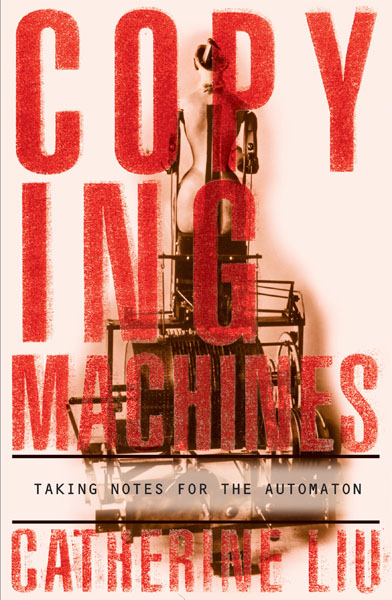 Anxieties about fixing the absolute difference between the human being and the mechanical replica, the automaton, are as old as the first appearance of the machine itself. Exploring these anxieties and the efforts they prompted, this book opens a window on one of the most significant, if subtle, ideological battles waged on behalf of the human against the machine since the Enlightenment—one that continues in the wake of technological and conceptual progress today.

A sustained examination of the automaton as early modern machine and as a curious ancestor of the twentieth-century robot, Copying Machines offers extended readings of mechanistic images in the eighteenth century through the prism of twentieth-century commentary. In readings of texts by Lafayette, Molière, Laclos, and La Bruyère—and in a chapter on the eighteenth-century inventor of automatons, Jacques Vaucanson—Catherine Liu provides a fascinating account of ways in which the automaton and the preindustrial machine haunt the imagination of ancien régime France and structure key moments of the canonical literature and criticism of the period.

One Response to “Catherine Liu: Copying Machines: Taking Notes for the Automaton (2000)”