Hans Freudenthal: Lincos: Design of a Language for Cosmic Intercourse, Part I (1960) 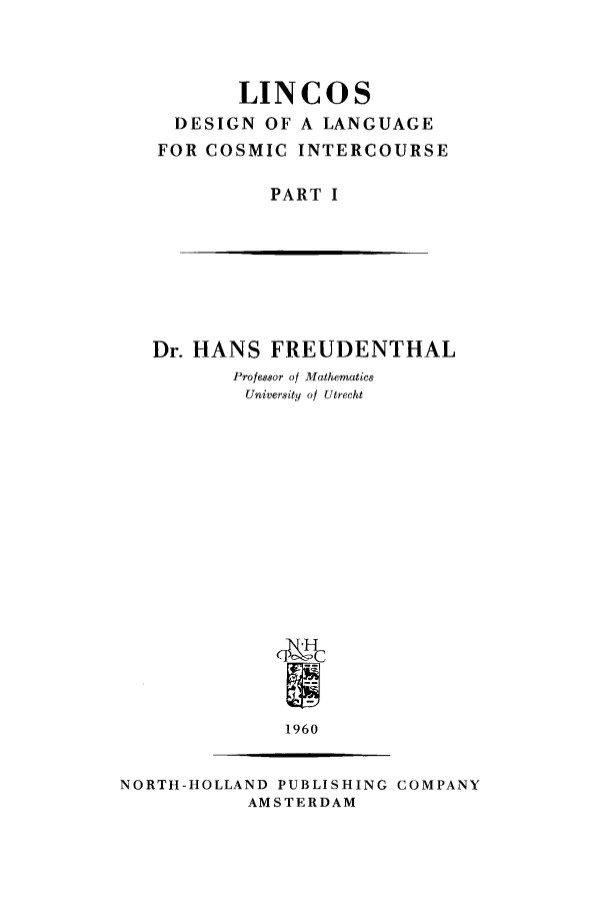 This book introduces an artificial language designed to be understandable by any possible intelligent extraterrestrial life form, for use in interstellar radio transmissions. The Dutch mathematician Hans Freudenthal considered that such a language should be easily understood by beings not acquainted with any Earthling syntax or language. Lincos was designed to be capable of encapsulating “the whole bulk of our knowledge.”

Publisher North-Holland, Amsterdam, 1960
Studies in Logic and the Foundations of Mathematics series
224 pages
via keriokleptes

Valerie Olson, Lisa Messeri: Beyond the Anthropocene: Un-Earthing an Epoch (2015)

“As “the Anthropocene” emerges as a geological term and environmental analytic, this paper examines its emerging rhetorical topology. We show that Anthropocene narratives evince a macroscale division between an “inner” and “outer” environment. Th is division situates an Anthropocenic environment that matters in the surface zone between Earth’s subsurface and the extraterrestrial “outer spaces” that we address here. We review literature in the sciences and social sciences to show how contemporary environmental thinking has been informed by understandings of Earth’s broader planet-scaled environmental relations. Yet, today’s Anthropocene conversation draws analytic attention inward and downward. Bringing in literature from scholars who examine the role of the extraterrestrial and outer environmental perspectives in terrestrial worlds, we suggest that Anthropocenic theorizations can productively incorporate inclusive ways of thinking about environments that matter. We argue for keeping “Anthropocene” connected to its spatial absences and physical others, including those that are non-anthropos in the extreme.” (Abstract)