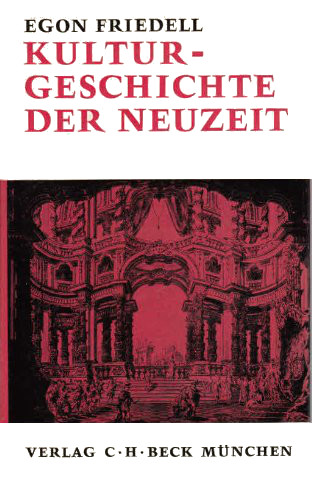 Austrian essayist, cabaret performer, and amateur cultural historian Egon Friedell is best known for his brilliant, playful, and stimulating magnum opus, A Cultural History of the Modern Age (1927-31), written under the influence of Oswald Spengler and Jacob Burckhardt. He hoped for a rebirth of Western culture; the Modern Age, which was born from the Great Plague of the fourteenth century, has come to its end. At the eve of World War II, Friedell committed suicide by jumping from a window of his apartment. The German writer Thomas Mann ranked Friedell as one of the greatest stylists of the German language.

A Cultural History of the Modern Age, inspired by H.G. Well’s The Outline of History (1920), is dedicated to Max Reinhardt. Its first volume deals with Renaissance and Reformation, the second Baroque, Enlightenment and the French Revolution, and the third part Romanticism, Liberalism, Imperialism, and Impressionism. Friedell’s view is subjective and intuitive – all history is saga and myth and it is nothing more than a difference in degree between historian and poet. “All the classifications man has ever devised are arbitrary, artificial, and false,” Friedell wrote, “but simple reflection also shows that such classifications are useful, indispensable, and above all unavoidable since they accord with an innate aspect of our thinking.” Following the Hegelian lines of though, Friedell sees his subject basically as a the process of spiritual history. Oswald Spengler’s (The Decline of the West, 1918-1922) pessimism and atheism he rejects. From the English writer, historian, and critic Thomas Carlyle (1795-1881) Friedell adopted the romantic “great man” theory of history, the hero-worship, totally ignoring its ominous connection with the political reality of his day. Every era and every generation has according to Friedell its own hero, a genius, who personifies the Zeitgeist, the spirit of the age. Nietzsche was for Friedell the epitome of the pre-WW I era. (from Petri Liukkonen’s short biography of Friedell) “This book by the legendary Situationist activist and author of The Revolution of Everyday Life examines the heretical and millenarian movements that challenged social and ecclesiastical authority in Europe from the 1200s into the 1500s.

Although Vaneigem discusses a number of different movements such as the Cathars and Joachimite millenarians, his main emphasis is on the various manifestations of the Movement of the Free Spirit in northern Europe. He sees not only resistance to the power of state and church but also the immensely creative invention of new forms of love, sexuality, community, and exchange. Vaneigem is particularly interested in the radical opposition presented by these movements to the imperatives of an emerging market-based economy, and he evokes crucial historical parallels with the antisystemic rebellions of the 1960s. The book includes translations of original texts and source materials.”

Full title: The Movement of the Free Spirit: General Considerations and Firsthand Testimony Concerning Some Brief Flowerings of Life in the Middle Ages, the Renaissance and, Incidentally, Our Own Time
Translated by Randall Cherry and Ian Patterson
Publisher Zone Books, 1994
ISBN 0942299701, 9780942299700
302 pages
via aleksag

Beginning as an investigation into the apparently disparate events that bookend the twentieth and twenty-first century – the collapse of Communism and the Islamic Revolution in Iran – Friendship of Nations: Polish Shi’ite Showbiz traces unlikely points of convergence in Iran and Poland’s economic, social, political, religious and cultural histories.

Drawing on Slavs and Tatars’ multi-disciplinary practice encompassing research, installations, lecture-performances and print media, this publication embraces new contributions in the form of essays, interviews, and archival presentation on subjects that range from seventeenth-century Sarmatism to the twenty-first-century Green Movement, taking in along the way, tales of the Polish Exodus, Wojtek the bear, craft, hospitality, Passion plays and taziyeh and the political lessons of a Polish slow burn-revolution for contemporary Iran.

Slavs and Tatars is a faction of polemics and intimacies devoted to an area east of the former Berlin Wall and west of the Great Wall of China and is joined here by Agata Araszkiewicz, Ramin Jahanbegloo and Adam Michnik, Mara Goldwyn, Shiva Balaghi and Michael D. Kennedy.