Bodily existence is an existence lived in constant fascination with a world beyond one’s reach. Embodiment, desire, metaphor. To exist on the verge of nonexistence. In the headlong pursuit of the real, of the other. Of the base materiality of the world, of religious hypothesis, of absolute relativity. Every utopia is a pornography, a recrudescence and pathological disillusionment, a lure into the vortex–paradoxical annulment of pure reason, compulsion, repetition, consumption.

A fact of bodily existence is to know that the body is our most complex and multi-faceted machine in a world of incessant technological progress. The body is a marvel of engineering; it is the outward face of primal nature; it is a disgusting vessel in which to house the soul; it is a primitive device, fragile and disposable. Bodies are re-produced, experimented upon to the limits of their tolerance, dissected and debated to every last cell, mended, prosthetically enhanced, moralised, abused and adored. The interface with the world we live in means that the body is always laid open to scrutiny without ever simply constituting some thing within our grasp: it is the site where violence and metaphysics interchange, technicity and catatonia, the sublime and the grotesque.

The body cannot be neutral or indifferent. Its design is such that it must respond to both exterior challenge and interior impulse. Our means of survival, the sex act, galvanizes the body into a unique state of existence, which, though transient, becomes the essence of being; the concentration of an idea, the heightening of sense, the ultimate dissolution.

How to write this purposeful transformation? How to write this instantaneous, ephemeral shattering of perception? This is the task of pornography. Our project will present the body in its most extreme of forms and behaviour, all of which demonstrate the human attempt to satisfy, and solve, the oft-inchoate needs of our psychology and physicality. We seek papers which deal with pornography as condition, symptom, addiction, spectacle, product, simulacrum. Above all as a fundamentalism embedded in the very structures of representation, knowledge, non-knowledge and the unpresentable. 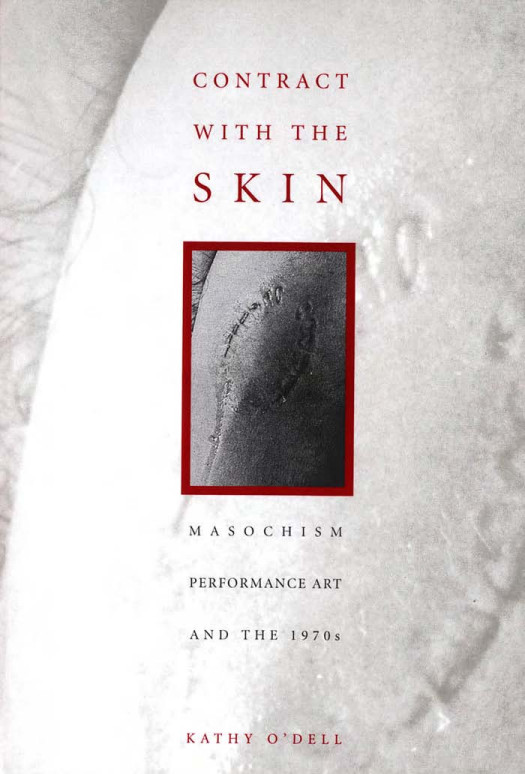 “Having yourself shot. Putting out fires with your bare hands and feet. Biting your own body and photographing the marks. Sewing your own mouth shut. These seemingly aberrant acts were committed by performance artists during the 1970s. Why would anyone do these things? What do these kinds of masochistic performances tell us about the social and historical context in which they occurred? Fascinating and accessibly written, Contract with the Skin addresses such questions through a reconsideration of these acts in relation to psychoanalytic and legal concepts of masochism.

O’Dell argues that the growth of masochistic performance during the 1970s must be seen in the context of society’s response to the Vietnam War and contemporaneous changes in theories of contract. She contends that the dynamic that exists between audience and performer during these masochistic acts relates to tensions resulting from ruptures in the social contract. Indeed, as the war in Vietnam waned, so did masochistic performance, only to reemerge in the 1980s in relation to the “war on AIDS” and the censorious “culture wars”.

Focusing on 1970s performance artists Vito Acconci, Chris Burden, Gina Pane, and collaborators Marina Abramovic/Ulay as well as those with similar sensibilities from the late 1980s onward — Bob Flanagan, David Wojnarowicz, Simon Leung, Catherine Opie, Ron Athey, Lutz Bacher, and Robby Garfinkel — O’Dell provides photographic documentation of performances and quotations from interviews with many of the artists. Throughout, O’Dell asks what we can do about the institutionalized forms of masochism for which these performances are metaphors.”