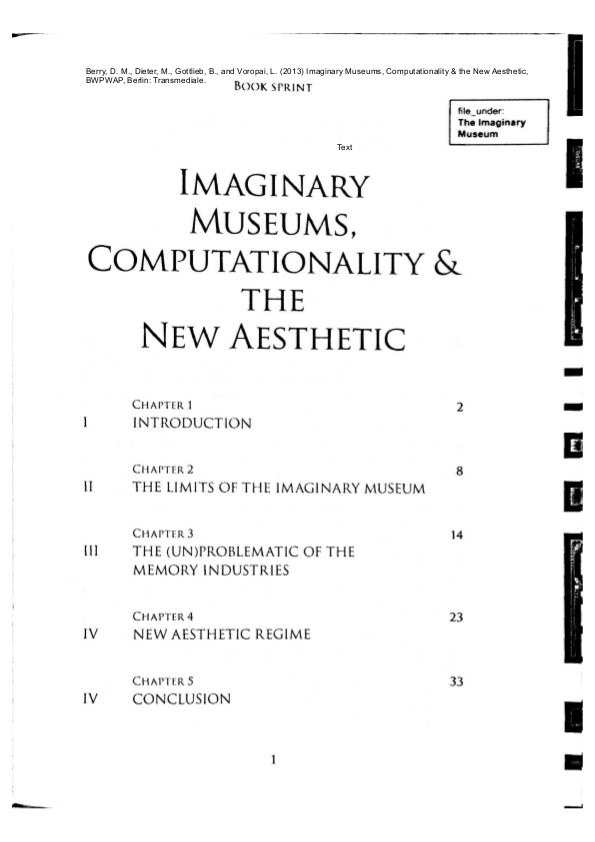 The New Aesthetic was a design concept and netculture phenomenon launched into the world by London designer James Bridle in 2011. It continues to attract the attention of media art, and throw up associations to a variety of situated practices, including speculative design, net criticism, hacking, free and open source software development, locative media, sustainable hardware and so on. This is how we have considered the New Aesthetic: as an opportunity to rethink the relations between these contexts in the emergent episteme of computationality. There is a desperate need to confront the political pressures of neoliberalism manifested in these infrastructures. Indeed, these are risky, dangerous and problematic times; a period when critique should thrive. But here we need to forge new alliances, invent and discover problems of the common that nevertheless do not eliminate the fundamental differences in this ecology of practices. In this book, perhaps provocatively, we believe a great deal could be learned from the development of the New Aesthetic not only as a mood, but as a topic and fix for collective feeling, that temporarily mobilizes networks. Is it possible to sustain and capture these atmospheres of debate and discussion beyond knee-jerk reactions and opportunistic self-promotion? These are crucial questions that the New Aesthetic invites us to consider, if only to keep a critical network culture in place.

New Aesthetic New Anxieties is the result of a five day Book Sprint organized by Michelle Kasprzak and led by Adam Hyde at V2_ from June 17–21, 2012.