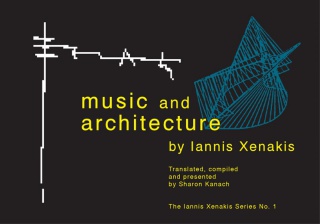 “This work fills a major lacuna in the literature by bringing together for the first time all of the projects, realizations and texts related to architecture by the multi-faceted Iannis Xenakis who worked with Le Corbusier for 12 years. Sharon Kanach assisted the composer in gathering the texts for this his last ambitious project.

The material in the book is presented under four main headings: “The Le Corbusier Years”, “Xenakis as Independent Architect”, “Writings on Architecture”, and “The Polytopes”. Three annexes include a commented bibliography of writings by and on Xenakis compiled by Makis Solomo, a critical index of Xenakis’s architecture by Sven Sterken, and a comparative chronology of Xenakis’s life and work by Sharon Kanach. The latter’s commentary throughout the book strives to bridge the reciprocal influences between music and architecture in the Xenakis oeuvre.”