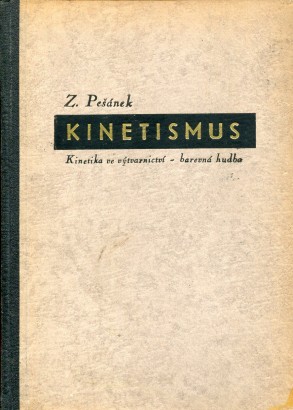 Zdeněk Pešánek (1896-1965) was one of the most inventive and original Czech sculptors of the 20th century, who pioneered experiments in light- and kinetic sculptures. His works, highly abstract and biomorphic, made use of neon and incandescent lighting as part of the sculptural elements. He also was a designer for both architectural and interior structures, and worked with the fusion of light and music, developing the use of “clavieres a lumieres” and light-organs. His aesthetic was more informed by sound and tonality than visual precedent, and is quite original. At this date almost no sculptures exist in private hands and the public sculptures have been largely damaged or destroyed. The book Kineticism: Kinetics in Fine Arts – Color Music is the only publication in his lifetime in which his theories were given exposition and is his creative credo as well, replete with b/w and color illustrations. Amazingly published during the Nazi occupation.