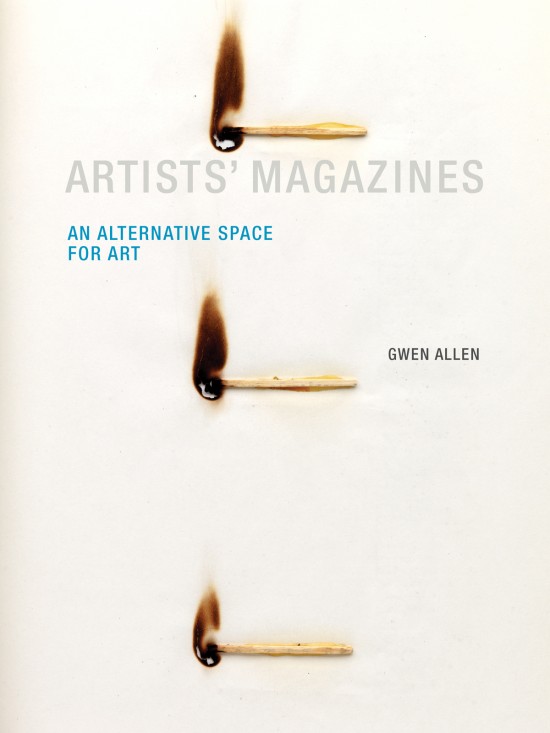 “Magazine publishing is an exercise in ephemerality and transience; each issue goes out in the world only to be rendered obsolete by the next. To publish a magazine is to enter into a heightened relationship with the present moment. During the 1960s and 1970s, magazines became an important new site of artistic practice, functioning as an alternative exhibition space for the dematerialized practices of conceptual art. Artists created works expressly for these mass-produced, hand-editioned pages, using the ephemerality and the materiality of the magazine to challenge the conventions of both artistic medium and gallery. In Artists’ Magazines, Gwen Allen looks at the most important of these magazines in their heyday (the 1960s to the 1980s) and compiles a comprehensive, illustrated directory of hundreds of others.

Among the magazines Allen examines are Aspen (1965–1971), a multimedia magazine in a box—issues included Super-8 films, flexi-disc records, critical writings, artists’ postage stamps, and collectible chapbooks; Avalanche (1970-1976), which expressed the countercultural character of the emerging SoHo art community through its interviews and artist-designed contributions; Art-Rite (1973-1978), an irreverent zine with a disposable, newsprint format; Real Life (1979-1994), published by Thomas Lawson and Susan Morgan as a forum for the Pictures generation; 0 to 9 (1967–1969), a mimeographed poetry magazine founded by Vito Acconci and Bernadette Meyer; FILE (1972–1989), founded by the Canadian collective General Idea, its cover design a sly parody of Life magazine; and Interfunktionen (1968–1975), founded to protest the conservative curatorial strategies of Documenta. These and the other magazines Allen examines expressed their differences from mainstream media in both form and content: they cast their homemade, DIY quality against the slickness of an Artforum, and they created work that defied the formalist orthodoxy of the day. (A work by John Baldessari from the late 1960s shows a photograph of Artforum, captioned “THIS IS NOT TO BE LOOKED AT.”) Artists’ Magazines, featuring abundant color illustrations of magazine covers and content, offers an essential guide to a little-explored medium.”