John Logie Baird, Britain’s foremost television pioneer, experimented with video recording onto gramophone discs in the late 1920s. Though unsuccessful at the time, his experiments resulted in several videodiscs, some 25 years before the videotape recorder became practical. These videodiscs – called Phonovision – remained neglected over the decades, considered by experts as unplayable.

In the early 1980s, the author sought out and restored the surviving Phonovision discs. Using computer-based techniques in an investigation reminiscent of an archaeological dig, the author has not only revealed the images on the discs but also uncovered details of how the recordings were made. The Phonovision discs have now become recognised as one of Baird’s most important legacies.

In 1996 and 1998, amateur ‘off-air’ recordings of the BBC’s 30-line Television Service (1932–35) were found, giving us our first view of what viewers were then watching. The author’s restoration overturns established views on mechanically scanned television, providing us today with a true measure of Britain’s heritage of television programme-making before electronic television.

As well as helping to explain a poorly understood and complex period in television’s history, this unique book, heavily illustrated with previously unpublished or rarely-seen historic photographs restored by the author, sheds light on the achievements of Baird, the development of video recording and the definition and invention of television itself. 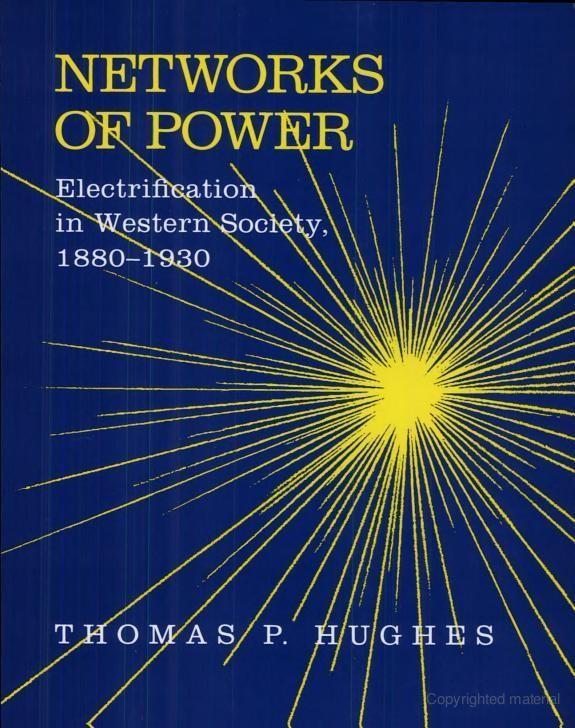 “A unique comparative history of the evolution of modern electric power systems. Networks of Power not only provides an accurate representation of large-scale technological change but also demonstrates that technology itself cannot be understood or directed unless placed in a cultural context. For Thomas Hughes, both the invention of the simplest devices (like the lightbulb itself) and the execution of the grandest schemes (such as harnessing the water power of the Bavarian Alps) fit into an overarching model of technological development. His narrative is an absorbing account of the creative genius, scientific achievements, engineering capabilities, managerial skills, and entrepreneurial risks behind one of the most commonplace amenities of the modern age.” (from the back cover)

The book was awarded the Dexter Prize by the Society for the History of Technology. “This unusual book traces the history of public and technical exhibitions, from their origins in the late 18th century to present day, and, particularly, how they have reflected the progress of science and technology (especially electrical technology). Not only does the author show how electrical innovation and manufacture have been presented to the wider public through this period, but he also shows how the exhibitions themselves have required technological advice. It is through this combination of roles that the importance of these exhibitions within scientific and technological advance can be understood.”