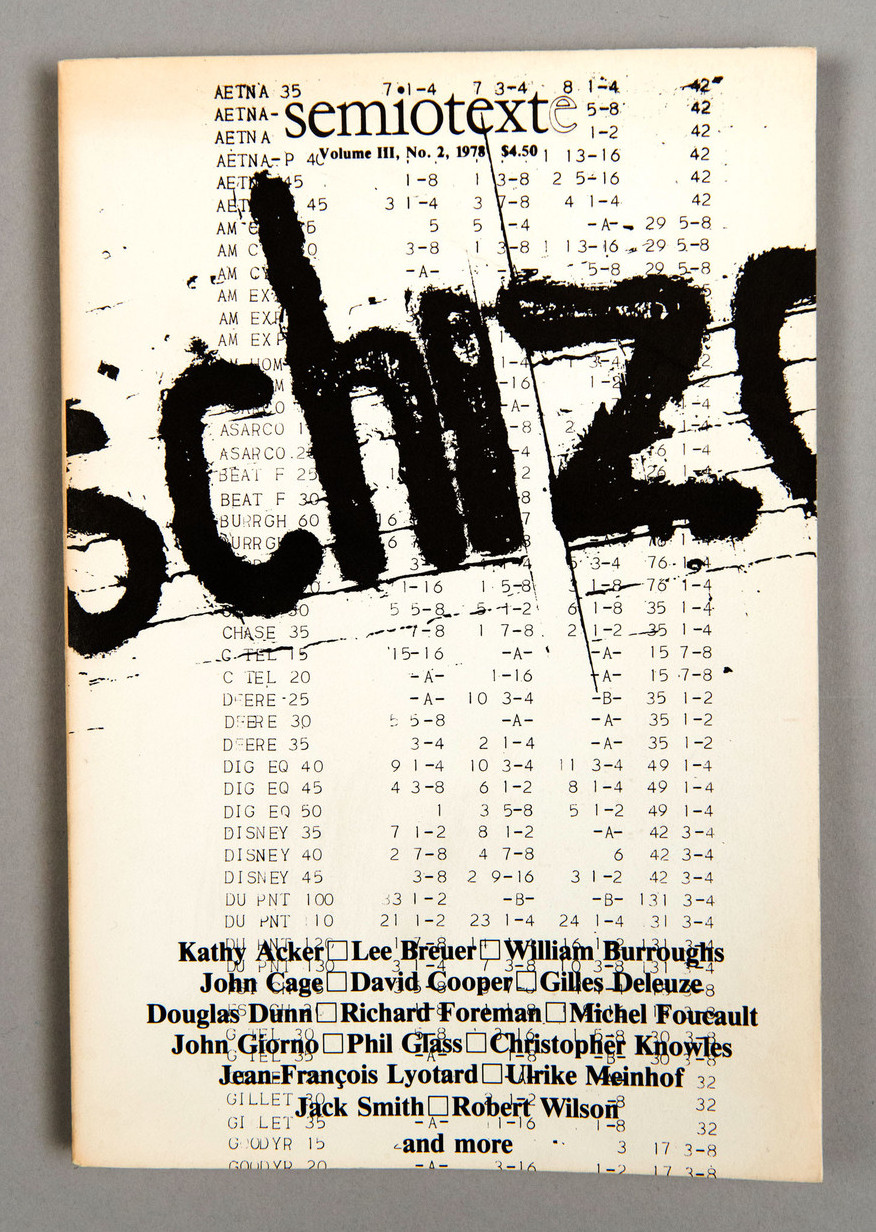 “Semiotext(e) began in 1974 as a journal started by French philosopher Sylvère Lotringer in an effort to bridge radical French theory and the intellectual and art worlds of New York City. The original editorial board included ten people, mostly graduate students at Columbia University where Lotringer teaches, who chipped in fifty dollars apiece to get the journal started. They held their first conference in 1975: the Schizo-Culture conference on prisons and madness. Speakers included Gilles Deleuze, Félix Guattari, Michel Foucault, and Jean-François Lyotard, now all staples of the Semiotext(e) backlist.” (from Wikipedia) “‘The unconscious is not a theatre, but a factory,’ wrote Gilles Deleuze and Félix Guattari in Anti-Oedipus (1972), instigating one of the most daring intellectual adventures of the last half-century. Together, the well-known philosopher and the activist-psychiatrist were updating both psychoanalysis and Marxism in light of a more radical and ‘constructivist’ vision of capitalism: ‘Capitalism is the exterior limit of all societies because it has no exterior limit itself. It works well as long as it keeps breaking down.’

Few people at the time believed, as they wrote in the often-quoted opening sentence of Rhizome, that ‘the two of us wrote Anti-Oedipus together.’ They added, ‘Since each of us was several, that became quite a crowd.’ These notes, addressed to Deleuze by Guattari in preparation for Anti-Oedipus, and annotated by Deleuze, substantiate their claim, finally bringing out the factory behind the theatre. They reveal Guattari as an inventive, highly analytical, mathematically-minded ‘conceptor,’ arguably one of the most prolific and enigmatic figures in philosophy and sociopolitical theory today. The Anti-Oedipus Papers (1969-1973) are supplemented by substantial journal entries in which Guattari describes his turbulent relationship with his analyst and teacher Jacques Lacan, his apprehensions about the publication of Anti-Oedipus and accounts of his personal and professional life as a private analyst and codirector with Jean Oury of the experimental clinic Laborde (created in the 1950s).” “‘One day, perhaps, this century will be Deleuzian,’ Michel Foucault once wrote. This book anthologizes 40 texts and interviews written over 20 years by renowned French philosopher Gilles Deleuze, who died in 1995. The early texts, from 1953-1966 (on Rousseau, Kafka, Jarry, etc.), belong to literary criticism and announce Deleuze’s last book, Critique and Clinic (1993). But philosophy clearly predominates in the rest of the book, with sharp appraisals of the thinkers he always felt indebted to: Spinoza, Bergson. More surprising is his acknowledgement of Jean-Paul Sartre as his master. ‘The new themes, a certain new style, a new aggressive and polemical way of raising questions,’ he wrote, ‘come from Sartre.’ But the figure of Nietzsche remains by far the most seminal, and the presence throughout of his friends and close collaborators, Felix Guattari and Michel Foucault. The book stops shortly after the publication of Anti-Oedipus, and presents a kind of genealogy of Deleuze’s thought as well as his attempt to leave philosophy and connect it to the outside—but, he cautions, as a philosopher.”