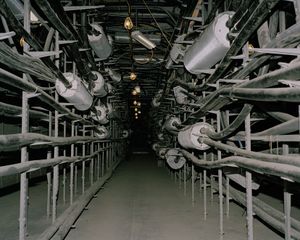 “This special issue of Culture Machine brings together scholars from a broad range of disciplines such as anthropology, architecture, media and communication studies, and fine arts, who have engaged with data and cloud infrastructures in their academic or artistic work. Taking data centers as technological apparatus as a starting point, this issue aims to discuss the cloud’s philosophical, political, social, and environmental impacts and maps the diverse sociotechnical assemblages which emerge in the course of cloud infrastructuring processes. How do the infrastructures of the cloud integrate into local political contexts and industrial landscapes? How do the cloud’s technologies relate to the emergence of specific forms of subjectivity, sociality, and urbanity? How can the barely visible and secret industrial spaces of the cloud be made visible and opened up for public engagement? And what does the study of data centers tell us about our current social moment?”

“Against the backdrop of a longstanding practice of erasure both in artistic and critical work, authors in this issue explore the aesthetics of erasure in the digital era, investigating new meanings and the relevance of erasure within contexts of digital production, preservation, and sharing.”