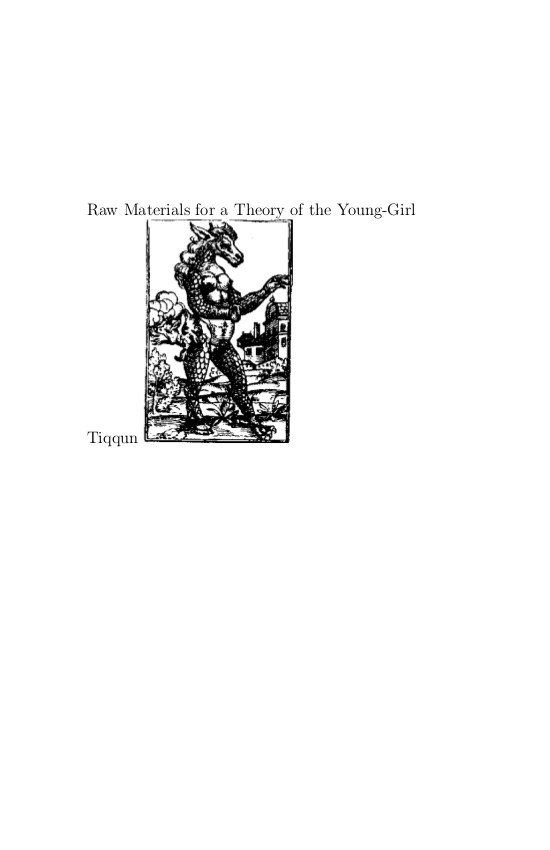 “First published in France in 1999, Preliminary Materials for a Theory of the Young-Girl dissects the impossibility of love under Empire. The Young-Girl is consumer society’s total product and model citizen: whatever “type” of Young-Girl she may embody, whether by whim or concerted performance, she can only seduce by consuming. Filled with the language of French women’s magazines, rooted in Proust’s figure of Albertine and the amusing misery of (teenage) romance in Witold Gombrowicz’s Ferdydurke, and informed by Pierre Klossowski’s notion of “living currency” and libidinal economy, Preliminary Materials for a Theory of the Young-Girl diagnoses — and makes visible — a phenomenon that is so ubiquitous as to have become transparent.

In the years since the book’s first publication in French, the worlds of fashion, shopping, seduction plans, makeover projects, and eating disorders have moved beyond the comparatively tame domain of paper magazines into the perpetual accessibility of Internet culture. Here the Young-Girl can seek her own reflection in corporate universals and social media exchanges of “personalities” within the impersonal realm of the marketplace. Tracing consumer society’s colonization of youth and sexuality through the Young-Girl’s “freedom” (in magazine terms) to do whatever she wants with her body, Tiqqun exposes the rapaciously competitive and psychically ruinous landscape of modern love.” (from Semiotexte, the publisher of the 2012 edition) Dissensus: On Politics and Aesthetics brings together some of Jacques Rancière’s most recent writings on art and politics to show the critical potential of two of his most important concepts: the aesthetics of politics and the politics of aesthetics.

In this fascinating collection, Rancière engages in a radical critique of some of his major contemporaries on questions of art and politics: Gilles Deleuze, Antonio Negri, Giorgio Agamben, Alain Badiou and Jacques Derrida. The essays show how Rancière’s ideas can be used to analyse contemporary trends in both art and politics, including the events surrounding 9/11, war in the contemporary consensual age, and the ethical turn of aesthetics and politics. Rancière elaborates new directions for the concepts of politics and communism, as well as the notion of what a ‘politics of art’ might be.

This important collection includes several essays that have never previously been published in English, as well as a brand new afterword. Together these essays serve as a superb introduction to the work of one of the world’s most influential contemporary thinkers.