The Global Encyclopaedia of Informality, 2 vols. (2018) 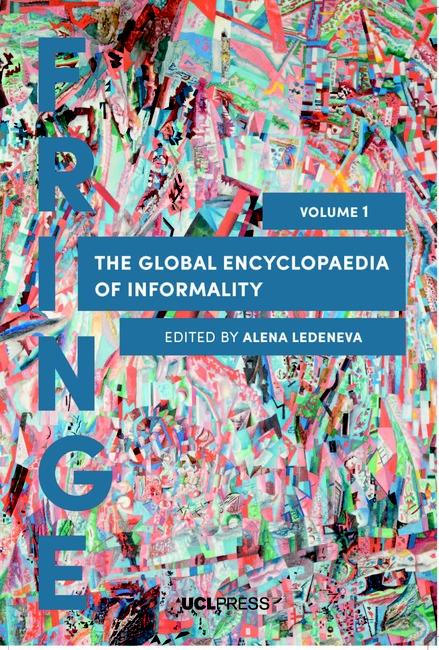 “Alena Ledeneva invites you on a voyage of discovery to explore society’s open secrets, unwritten rules and know-how practices. Broadly defined as ‘ways of getting things done’, these invisible yet powerful informal practices tend to escape articulation in official discourse. They include emotion-driven exchanges of gifts or favours and tributes for services, interest-driven know-how (from informal welfare to informal employment and entrepreneurship), identity-driven practices of solidarity, and power-driven forms of co-optation and control. The paradox, or not, of the invisibility of these informal practices is their ubiquity. Expertly practised by insiders but often hidden from outsiders, informal practices are, as this book shows, deeply rooted all over the world, yet underestimated in policy. Entries from the five continents presented in this volume are samples of the truly global and ever-growing collection, made possible by a remarkable collaboration of over 200 scholars across disciplines and area studies. By mapping the grey zones, blurred boundaries, types of ambivalence and contexts of complexity, this book creates the first Global Map of Informality. The accompanying database (www.in-formality.com) is searchable by region, keyword or type of practice.”

Christopher Hayes: Twilight of the Elites: America After Meritocracy (2012) A powerful and original argument that traces the roots of our present crisis of authority to an unlikely source: the meritocracy.

Over the past decade, Americans watched in bafflement and rage as one institution after another – from Wall Street to Congress, the Catholic Church to corporate America, even Major League Baseball – imploded under the weight of corruption and incompetence. In the wake of the Fail Decade, Americans have historically low levels of trust in their institutions; the social contract between ordinary citizens and elites lies in tatters.

How did we get here? With Twilight of the Elites, Christopher Hayes offers a radically novel answer. Since the 1960s, as the meritocracy elevated a more diverse group of men and women into power, they learned to embrace the accelerating inequality that had placed them near the very top. Their ascension heightened social distance and spawned a new American elite–one more prone to failure and corruption than any that came before it.

Mixing deft political analysis, timely social commentary, and deep historical understanding, Twilight of the Elites describes how the society we have come to inhabit – utterly forgiving at the top and relentlessly punitive at the bottom – produces leaders who are out of touch with the people they have been trusted to govern. Hayes argues that the public’s failure to trust the federal government, corporate America, and the media has led to a crisis of authority that threatens to engulf not just our politics but our day-to-day lives.

Upending well-worn ideological and partisan categories, Hayes entirely reorients our perspective on our times. Twilight of the Elites is the defining work of social criticism for the post-bailout age.