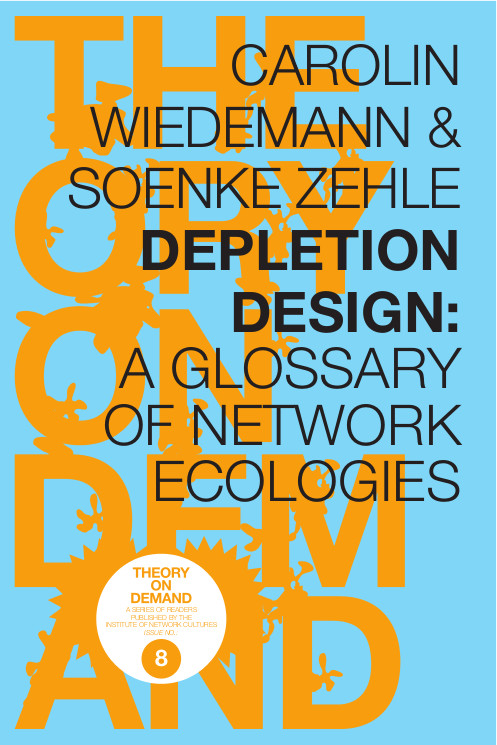 “Depletion Design suggests that ideas of exhaustion cut across cultural, environmentalist, and political idioms and offers ways to explore the emergence of new material assemblages. Soenke Zehle and Carolin Wiedemann discuss Depletion Design with Marie-Luise Angerer, Jennifer Gabrys and David M. Berry, inviting tm13 participants into a collaborative reflection on the necessity to understand human beings as one species among others – constituted by interactions of media, organisms, weather patterns, ecosystems, thought patterns, cities, discourses, fashions, populations, brains, markets, dance nights and bacterial exchanges (Angerer); on the material leftovers of electronics as provocations to think through and rework practices of material politics that may be less exploitative within our natural-cultural relationships (Gabrys); and on lines of flight from and through the computational – about expanding them into new ways of living beyond current limitations and towards new means of judgment and politics (Berry).

We, or so we are told, are running out of time, of time to develop alternatives to a new politics of emergency, as constant crisis has exhausted the means of a politics of representation too slow for the state of exception, too ignorant of the distribution of political agency, too focused on the governability of financial architectures. But new forms of individual and collective agency already emerge, as we learn to live, love, work within the horizon of depletion, to ask what it means to sustain ourselves, each other, again. Of these and other knowledges so created, there can no longer be an encyclopedia; a glossary, perhaps.”

“It’s always useful to turn dreams into realities, because you get to measure the differences and even let yourselves be guided by the intrinsic gaps between the two. Continental Drift was the dream of a geopolitical analysis carried out by a diverse group (theorists, artists, activists) and mapped onto everyday social and political life as an expanding set of explanations and expressive potentials. The dream was made in USA, and even on Wall Street in New York City, but it was realized by a group of immigrants, returning exiles and general misfits, all marked by the basic heresy of left positions in an age of liberal capitalist empire. By transplanting this inquiry to Zagreb, Croatia – the home of the What, How & For Whom? collective – it seems we are bringing a new dream into focus. The desire is that of widening the intrepretative circle, crossing divides of language and historical experience, trying to build capacities of understanding and confrontation between the immigrants, exiles and misfits of the big continental blocs and especially their edges – the cracks that open up wherever anyone can no longer stand what is taken and imposed as the norm. Empire as we see it is always falling apart, for better and usually for worse, under the pressure of massive processes which we are unlikely to even see coming, let alone grasp or have the agency to change in any way. Yet as the urgency and also the absurdity of the present predicament begins to rise in intensity, at least all around there are people trying similar experiments.” (Brian Holmes)