A seminal and controversial figure in the history of political thought and public relations, Edward Bernays (1891–1995), pioneered the scientific technique of shaping and manipulating public opinion, which he famously dubbed “engineering of consent.” During World War I, he was an integral part of the U.S. Committee on Public Information (CPI), a powerful propaganda apparatus that was mobilized to package, advertise and sell the war to the American people as one that would “Make the World Safe for Democracy.” The CPI would become the blueprint in which marketing strategies for future wars would be based upon.

Bernays applied the techniques he had learned in the CPI and, incorporating some of the ideas of Walter Lipmann, became an outspoken proponent of propaganda as a tool for democratic and corporate manipulation of the population. His 1928 bombshell Propaganda lays out his eerily prescient vision for using propaganda to regiment the collective mind in a variety of areas, including government, politics, art, science and education. To read this book today is to frightfully comprehend what our contemporary institutions of government and business have become in regards to organized manipulation of the masses.

The Century Of The Self: One: Happiness Machines (documentary film by Adam Curtis featuring Edward Bernays) Based on more than forty interviews with Jobs conducted over two years—as well as interviews with more than a hundred family members, friends, adversaries, competitors, and colleagues—Walter Isaacson has written a riveting story of the roller-coaster life and searingly intense personality of a creative entrepreneur whose passion for perfection and ferocious drive revolutionized six industries: personal computers, animated movies, music, phones, tablet computing, and digital publishing.

At a time when America is seeking ways to sustain its innovative edge, and when societies around the world are trying to build digital-age economies, Jobs stands as the ultimate icon of inventiveness and applied imagination. He knew that the best way to create value in the twenty-first century was to connect creativity with technology. He built a company where leaps of the imagination were combined with remarkable feats of engineering.

Although Jobs cooperated with this book, he asked for no control over what was written nor even the right to read it before it was published. He put nothing off-limits. He encouraged the people he knew to speak honestly. And Jobs speaks candidly, sometimes brutally so, about the people he worked with and competed against. His friends, foes, and colleagues provide an unvarnished view of the passions, perfectionism, obsessions, artistry, devilry, and compulsion for control that shaped his approach to business and the innovative products that resulted.

Driven by demons, Jobs could drive those around him to fury and despair. But his personality and products were interrelated, just as Apple’s hardware and software tended to be, as if part of an integrated system. His tale is instructive and cautionary, filled with lessons about innovation, character, leadership, and values. 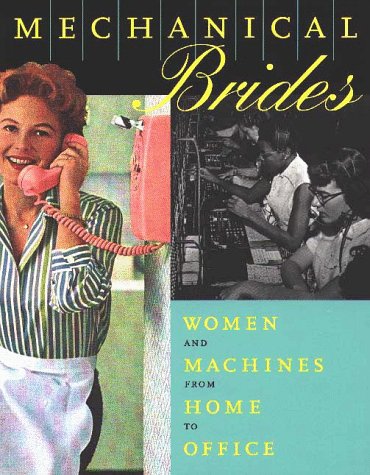 During the 20th century, the marketing of domestic appliances and office machines has been directed primarily toward women. Mechanical Brides examines this phenomenon through extensive graphics (advertisements, catalog pages, photographs) and analytical text.