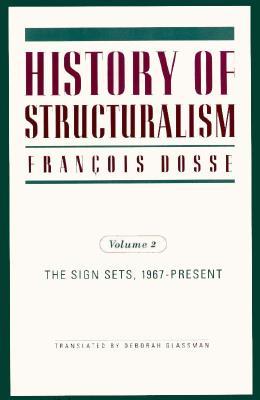 “Claude Lévi-Strauss, Roland Barthes, Jacques Lacan, Louis Althusser, Jacques Derrida, and Michel Foucault—the ideas of this group of French intellectuals who propounded structuralism and poststructuralism have had a profound impact on disciplines ranging from literary theory to sociology, from anthropology to philosophy, from history to psychoanalysis. In this long-awaited translation, History of Structuralism examines the thinkers who made up the movement, providing a fascinating elucidation of a central aspect of postwar intellectual history.

François Dosse tells the story of structuralism from its beginnings in postwar Paris, a city dominated by the towering figure of Jean-Paul Sartre. The work of Saussure became the point of departure for a group of younger scholars, and the outcome was not only the doom of Sartre as intellectual leader but the birth of a movement that would come to reconfigure French intellectual life and would eventually reverberate throughout the Western world.

Dosse provides a readable, intelligible overall account, one that shows the interrelationship among the central currents of structuralism and situates them in context. Dosse illuminates the way developments in what are usually distinct fields came to exert such influence on each other, showing how the early structuralists paved the way for later developments and for recent discourses such as postmodernism. The cast of characters related by Dosse includes those mentioned above as well as Roman Jakobson, Julia Kristeva, Pierre Bourdieu, Gilles Deleuze, Félix Guattari, Tzvetan Todorov, and many others. Chapters are devoted to major figures, and Dosse has done extensive interviews with the major and minor figures of the movement, furnishing an intellectual history in which historical players look back at the period.

This first comprehensive history of the structuralist movement is an essential guide to a major moment in the development of twentieth-century thought, one that provides a cogent map to a dizzying array of personalities and their ideas. It will be compelling reading for those interested in philosophy, literary theory, sociology, anthropology, linguistics, and psychoanalysis.”