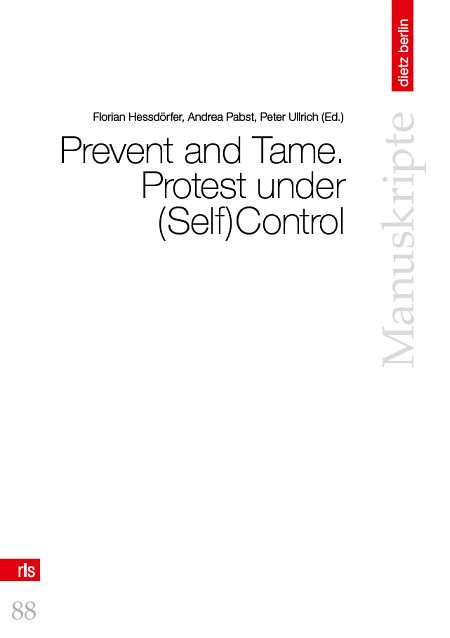 The common dualistic approach to social movements tends to see power and resistance as separate and independent antagonists.

The contributors to this book aim to transcend that approach, arguing that to adequately analyze ongoing struggles, it is also critically important to trace the constitutive interconnectedness between social movements and power. This is the aim of the title “Prevent and Tame”: emergent strategies to prevent and tame protest—whether they are undertaken by the state or by factions within the movements themselves—have given rise to new kinds of social relations and regulations that call for a new approach to research on social movements and protest.

Inspired by Foucault and others, this book offers theoretical and empirical investigation into the implications that governmentality studies and subjectivation perspectives may have for a deeper understanding of the dynamics in the relationship between power and movements. The articles reflect on the effects of current neo-liberal or neo-social transformations on social movement practice, including the impact of surveillance, the criminalization and stigmatization of protest, and how these can lead movements to engage in self-taming behavior amongst themselves.

Taken as a whole, this book suggests that to take the struggles of social movements seriously, requires to acknowledge the complexity of the power dynamics in which they are involved. In so doing, the authors’ aim is not to tame protest by over-amplifying its apparent obstacles, but to prevent its energy from being pointlessly wasted or misdirected (i.e. by being spent in the wrong places, in false conflicts, or even in fighting the clouds they cast themselves). In a world where our lives are increasingly mediated by technologies it is surprising that more attention is not paid to the work of Gilles Deleuze. This is especially strange given Deleuze’s often explicit focus and reliance on the machine and the technological. This volume offers readers a collective and determined effort to explore not only the usefulness of key ideas of Deleuze in thinking about our new digital and biotechnological future but, also aims to take seriously a style of thinking that negotiates between philosophy, science and art. This exciting collection of essays will be of relevance not only to scholars and students interested in the work of Deleuze but, also, to those interested in coming to terms with what might seem an increasing dominance of technology in day to day living. Illegal migrants who evade detection, creators of value in insecure and precarious working conditions and those who refuse the constraints of sexual and biomedical classifications: these are the people who manage to subvert power and to craft unexpected sociabilities and experiences. Escape Routes shows how people can escape control and create social change by becoming imperceptible to the political system of Global North Atlantic societies.