From Facebook to the iPhone, from YouTube to Wikipedia, from Grand Theft Auto to Second Life – this book explores new media?s most important issues and debates in an accessible and engaging text for newcomers to the field.

With technological change continuing to unfold at an incredible rate, Digital Cultures rounds-up major events in the media?s recent past to help develop a clear understanding of the theoretical and practical debates that surround this emerging discipline. It addresses issues such as:

* What is new media?
* How is new media changing our lives?
* Is new media having a positive or negative effect on culture and human communication?

Each chapter contains case studies which provide an interesting and lively balance between the well-trodden and the newly emerging themes in the field.

Digital Cultures is an essential introductory guide for all media and communication studies students, as well as those with a general interest in new media and its impact on the world around us. The Digital Dialectic is an interdisciplinary jam session about our visual and intellectual cultures as the computer recodes technologies, media, and art forms. Unlike purely academic texts on new media, the book includes contributions by scholars, artists, and entrepreneurs, who combine theoretical investigations with hands-on analysis of the possibilities (and limitations) of new technology. The key concept is the digital dialectic: a method to ground the insights of theory in the constraints of practice. The essays move beyond journalistic reportage and hype into serious but accessible discussion of new technologies, new media, and new cultural forms.

Siegfried Zielinski: Audiovisions: Cinema and Television as Entr’actes in History (1989/1999) 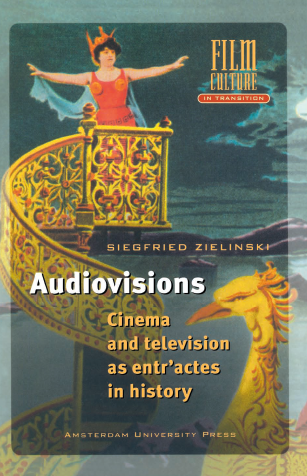 “The production, distribution, and perception of moving images are undergoing a radical transformation. Ever-faster computers, digital technology, and microelectronic are joining forces to produce advanced audiovision -the media vanishing point of the 20th century. Very little will remain unchanged.

The classic institutions for the mediation of film – cinema and television – are revealed to be no more than interludes in the broader history of the audiovisual media. This book interprets these changes not simply as a cultural loss but also as a challenge: the new audiovisions have to be confronted squarely to make strategic intervention possible.

Audiovisions provides a historical underpinning for this active approach. Spanning 100 years, from the end of the 19th to the end of the 20th century, it reconstructs the complex genesis of cinema and television as historically relative – and thus finite – cultural forms, focussing on the dynamics and tension in the interaction between the apparatus and its uses. The book is also a plea for “staying power” in studies of cultural technology and technological culture of film.

Essayistic in style, it dispenses with complicated cross references and, instead, is structured around distinct historical phases. Montages of images and text provide supplemental information, contrast, and comment.”