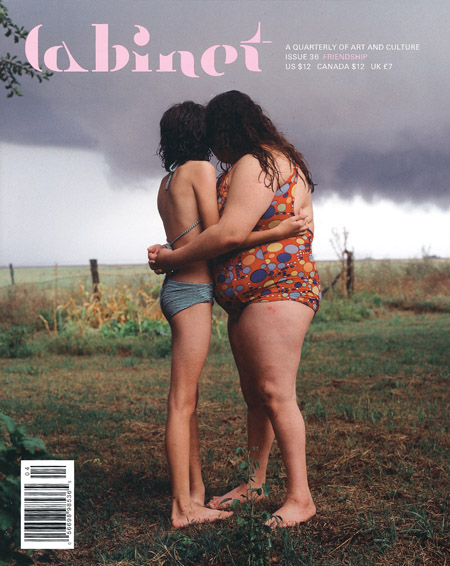 “The nature of friendship has been a subject of inquiry from the beginnings of the western philosophical tradition. Socrates considers the question of philia in one of Plato’s earliest dialogues, declaring that his “passion for friends” causes him to value them above even gold. Subsequent thinkers have continued the inquiry, yet friendship remains a phenomenon that “may well be reckoned,” as Emerson wrote, “the masterpiece of nature.”

Issue 36 of Cabinet, with its special section on friendship, features Svetlana Boym on Hannah Arendt’s definition of friendship as freedom from “totalitarianism for two”; Ruben Gallo on Freud’s school friend with whom he communicated mainly in Spanish; and Regine Basha on Sol Lewitt’s exchange of gifts with other artists. Elsewhere in the issue: Paul La Farge on the color black; Kevin McCann on the life and work of schizophrenic author Louis Wolfson, the object of fascination for a generation of French intellectuals; Helen Polson on the fate of lost teeth; Bertell Ollman on his infamous board game Class Struggle; and an artist project by Zoe Bellof.”

HTML
Other issues (articles from sold-out issues are available online) “The three essays collected in this book offer a succinct introduction to Agamben’s recent work through an investigation of Foucault’s notion of the apparatus, a meditation on the intimate link of philosophy to friendship, and a reflection on contemporariness, or the singular relation one may have to one’s own time.

‘Apparatus’ (dispositif in French) is at once a most ubiquitous and nebulous concept in Foucault’s later thought. In a text bearing the same name (‘What is a dispositif?’) Deleuze managed to contribute its mystification, but Agamben’s leading essay illuminates the notion: ‘I will call an apparatus,’ he writes, ‘literally anything that has in some way the capacity to capture, orient, determine, intercept, model, control, or secure the gestures, behaviors, opinions, or discourses of living beings.’ Seen from this perspective, Agamben’s work, like Foucault’s, may be described as the identification and investigation of apparatuses, together with incessant attempts to find new ways to dismantle them.

Though philosophy contains the notion of philos, or friend, in its very name, philosophers tend to be very skeptical about friendship. In his second essay, Agamben tries to dispel this skepticism by showing that at the heart of friendship and philosophy, but also at the core of politics, lies the same experience: the shared sensation of being.

Guided by the question, “What does it mean to be contemporary?” Agamben begins the third essay with a reading of Nietzsche’s philosophy and Mandelstam’s poetry, proceeding from these to an exploration of such diverse fields as fashion, neurophysiology, messianism and astrophysics.”