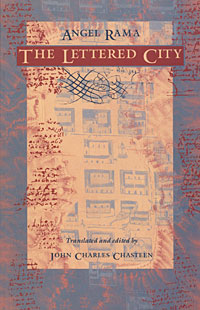 “Angel Rama’s La ciudad letrada was published in 1984, shortly after he had died in a plane accident in Spain. Since then, it has quickly established itself as one of the most daring, perspicacious and innovative analyses of Latin American history, literature and political culture. However, because it was not completed due to his untimely death, the book was an incomplete synthesis of several decades of literary criticism and history. Even if Rama had not written La ciudad letrada, his place on the canon of Latin American letters would have been secured by his pioneering work on intra-American comparative literary studies. Rama, appropriating a term from Cuban anthropologist Fernando Ortiz, introduced into Latin American literary studies the term ‘transculturation’, which sought to conceptualize the interaction between indigenous, criollo and mestizo cultures in Latin America, and in this way he gave a hermeneutic key for unlocking many key texts of Latin American letters.

Rama’s book is surely about letters, literature and writing, but it is also about cities, space, spatialization and the relationship between the syntax of languages and the order of space. The book is, in fact, what one may call a philosophical-historical-cultural essay that uses literature and the ‘writer’–el letrado–to elaborate a wide-ranging interpretative thesis about Latin America as a cultural unit. Its genre is thus not a literary theory, comparative literature, or even cultural studies, even if it contributes to these. In German one calls this genre Geistesgeschichte, which is neither a spiritual nor an intellectual history, but rather a history of the animating logic of a culture.” (from a review by Eduardo Mendieta, City, 2006) “Drawing together many histories — of anatomical evolution and city design, of treadmills and labyrinths, of walking clubs and sexual mores — Rebecca Solnit creates a fascinating portrait of the range of possibilities presented by walking. Arguing that the history of walking includes walking for pleasure as well as for political, aesthetic, and social meaning, Solnit focuses on the walkers whose everyday and extreme acts have shaped our culture, from philosophers to poets to mountaineers. She profiles some of the most significant walkers in history and fiction — from Wordsworth to Gary Snyder, from Jane Austen’s Elizabeth Bennet to Andre Breton’s Nadja — finding a profound relationship between walking and thinking and walking and culture. Solnit argues for the necessity of preserving the time and space in which to walk in our ever more car-dependent and accelerated world.”