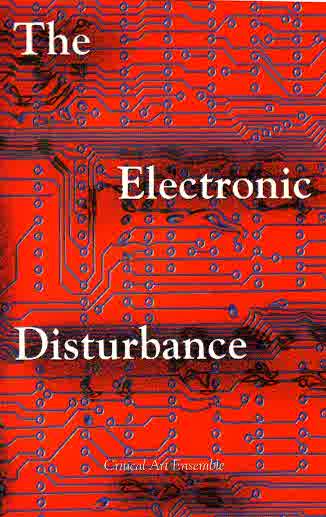 The Critical Arts Ensemble is a virtual collective. This collection of essays and short pieces examines the changing rules of cultural and political resistance: “The current technological revolution has created a new geography of power relations — as data, human beings confront an authoritarial impulse that thrives on absence. As a virtual geography of cognizance and action, resistance must assert itself in electronic space.” 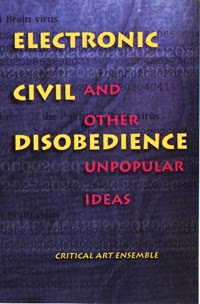 In the age of global, nomadic capital, the CAE attempts to lay the foundation for the growth of nomadic resistance. Utilizing the tools of its enemy, the CAE suggests that a new cultural and political resistance is possible. Fusing a situationist-influenced concept of contestational art, an understanding of the parallel nature of cultural and political action borrowed from Gramsci, and a hacker’s deep understanding of how new technology functions, ECD is a launch point for debating the nature of power and resistance in the information age. 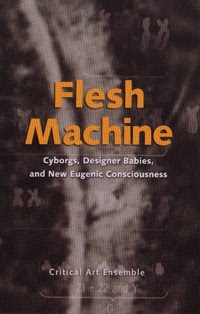 Having elsewhere explored the dimensions of social and political control in electronic culture, the Critical Arts Ensemble here turns full frontal towards the body, arguing that utopian promises of virtuality are simple distractions from the real project: the deployment of biotechnologies upon the bodies of citizens in the service of the transnational order. 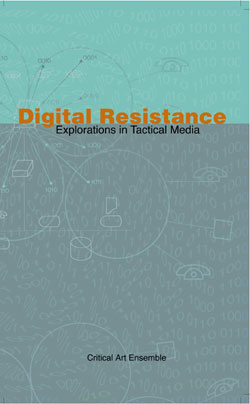 Essays in cultural politics and technology from the collective authors of Electronic Disturbance, Electronic Civil Disobedience and Flesh Machine. Chapters in this new volume include “Electronic Civil Disobedience and the Public Sphere,” “The Mythology of Terrorism on the Net,” “The Promissory Rhetoric of Biotechnology,” “Observations on Collective Cultural Action,” “Recombinant Theater and Digital Resistance,” “Contestational Robotics,” “Children as Tactical Media Participants,” and “The Financial Advantages of Anti-Copyright.” 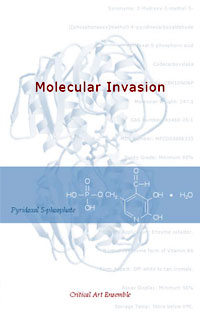 Having exhausted the possibilities for geographic colonial expansion, as well as reaching the fiscal limitations of virtual space, capital begins its invasion of a new frontier — organic molecular space. The Critical Art Ensemble began mapping this development in Flesh Machine (Autonomedia, 1998) by examining the use of reproductive technologies and their promise for achieving an intensified degree of control over worker and citizen. The Molecular Invasion acts as a companion to this first book by mapping the politics of transgenics, and offering a model for the creation of a contestational biology, as well as providing direct interventionist tactics for the disruption of this new assault on the organic realm. 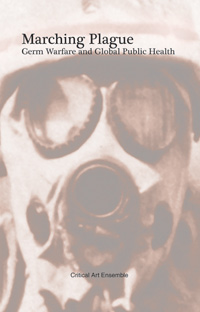 The sixth Critical Art Ensemble book offers a radical reframing of the rhetoric surrounding germ warfare. After refuting the idea that massive biological attack is a probable future occurrence, the book goes on to argue that biological weapons programs primarily serve the economic interests of the military-security complex, squandering resources needed to fight the massive loss of life each year from emerging infectious diseases. The book also includes two appendices examining the case of the U.S. Justice Department against Steve Kurtz, for which the original manuscript of the book was seized in the state’s investigation. World of Warcraft is the world’s most popular massively multiplayer online game (MMOG), with (as of March 2007) more than eight million active subscribers across Europe, North America, Asia, and Australia, who play the game an astonishing average of twenty hours a week. This book examines the complexity of World of Warcraft from a variety of perspectives, exploring the cultural and social implications of the proliferation of ever more complex digital gameworlds. The contributors have immersed themselves in the World of Warcraft universe, spending hundreds of hours as players (leading guilds and raids, exploring moneymaking possibilities in the in-game auction house, playing different factions, races, and classes), conducting interviews, and studying the game design–as created by Blizzard Entertainment, the game’s developer, and as modified by player-created user interfaces. The analyses they offer are based on both the firsthand experience of being a resident of Azeroth and the data they have gathered and interpreted.

The contributors examine the ways that gameworlds reflect the real world–exploring such topics as World of Warcraft as a “capitalist fairytale” and the game’s construction of gender; the cohesiveness of the gameworld in terms of geography, mythology, narrative, and the treatment of death as a temporary state; aspects of play, including “deviant strategies” perhaps not in line with the intentions of the designers; and character–both players’ identification with their characters and the game’s culture of naming characters. The varied perspectives of the contributors–who come from such fields as game studies, textual analysis, gender studies, and postcolonial studies–reflect the breadth and vitality of current interest in MMOGs.