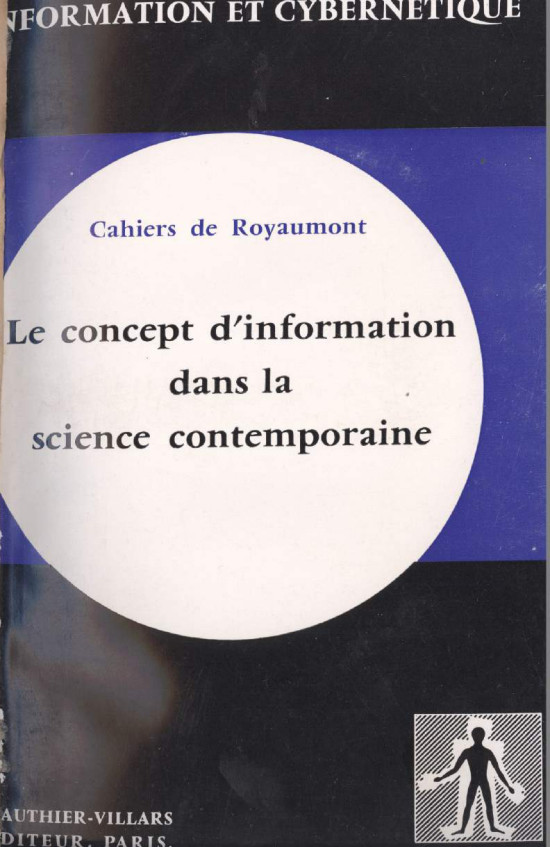 “The proceedings from the Sixth Symposium at Royaumont in 1962 were titled Le concept d’information dans la science contemporaine [The Concept of Information in Contemporary Science] and were published three years later in Paris by Les Éditions de Minuit.

Simondon was a very active organizer and introduced Wiener. The collection is fascinating for a number of reasons; most striking, perhaps, is the fact that a prominent Marxist (Goldmann) and a brilliant mathematician (Mandelbrot) were given equal opportunity to talk philosophically about the concept of information. Mathematicians like Mandelbrot and Wiener were given the same stage as philosophers like Simondon and Hyppolite.

Some of the papers are pretty scientific, but most of them are not. What you get is a collection of papers given and discussed (the Q & As are included and are revealing) by some of the individuals who heavily influenced Deleuze and a number of other French philosophers. This is an incredibly revealing volume and I will eventually work hard to translate some of the papers that are included.

Simondon’s paper, ‘L’Amplification dans les processus d’information’, was not included in the proceedings (only the abstract is provided at the very end of the book, along with the topic of Wiener’s response to Simondon), but was published and is available in the collection of his papers titled Communication and Information: Courses and Conferences (La Transparence, 2010).” (from a blog post by Andrew Iliadis)

Review: D. Gabor (The British Journal for the Philosophy of Science, 1966, EN).